You may want to add scales for time-speed- distance computations. Here is a link to an image of a Soviet flight navigation sliderule:

I am attaching three photos of mine to illustrate this. The course is 100 degrees, the wind is coming from 250 so the relative wind angle is 150 degrees. (On a boat this would be a current setting 160 degrees so the relative current angle is 30 degrees)  Using 80 knots airspeed and wind speed of  30 knots. (For boats, 8 knot boat speed, relative current angle 30 degrees since current is shown as the direction in which the current is moving, winds are named for the direction they are coming from, and 3 knot current speed.)

The first image shows the cursor lined up on 80 on the "K" scale and 30/150 in the sine scale. Second shows the cursor moved to 30 on the "K" scale and reading out the wind correction angle of 11 degrees. The third image shows the cursor repositioned to 41/139 (11 added to 30 or subtracted from 150) on the sine scale and the groundspeed 104 K (speed over the bottom 10.4 K.) So, to maintain course, the heading of the plane or boat is changed to 111 degrees. We can see that we have a tailwind (following current) so our groundspeed is greater than the air speed. If the wind or current was on the nose then we move the cursor in the opposite diretion when combining the wind correction angle with the relative wind angle to find the groundspeed.

When I am training a student pilot in how to do this computation I like to grab his E-6B and say "here, use mine instead" and see that "deer-in-the-headlights" look on his face. 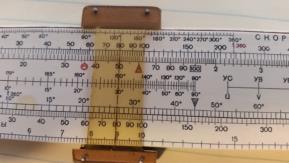 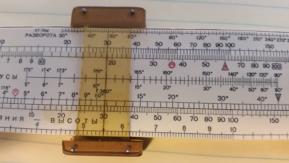 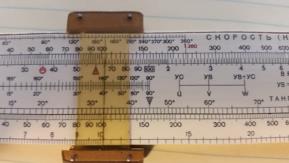