A big part of my reason for liking the stick-style slide rule, of course, is sentimental. I am using the celluloid-on-mahogany rule that my dad got when he started engineering at (what is now called) Clemson University back in 1940.

Greg Rudzinski asked for a picture of my slide rule with working notes for one of the great circle calculations. I have attached several to this posting. The files are rather large, but I wanted you to be able to zoom in on them. I have also attached one of my worksheets.

I used this worksheet in working the problem first with an electronic calculator, then a blank version of the same worksheet to do the problem again by slide rule.

I was faster with the slide rule a year ago than I was today. It is a skill of manual dexterity, and so degrades over time if not practiced.

I have none of my actual worksheets left around that were generated at sea, but I am attaching here a typical-style worksheet from a hypothetical position, with notes on how long it took me to work this problem - out on the slide rule vs. with an electronic calculator.

As noted, I have also included photos of the slide rule itself. Not all rules are created equal. They all do basic multiply-and- divide...but beyond that are usually optimized for a particular family of calculations. For instance, with the Keuffel & Esser rule that I use, you will notice, the S-scale (sine) has black numbers leaning to the right - which are sine values. On the same scale, there are red numbers leaning to the left - these are cosine numbers. This makes it easier to do Ageton equations, as they use both sines and cosines all the time. Of course, one can use a rule with an S-scale that does ONLY the sine values...and you can do cosine in your head, since they are inverse values. But K&E's approach to this slightly reduces the risk of making a simple error as you work with cosine values. The other thing that K&E attempted to do with this rule was to let you work out problems with a minimal need to write down intermediate values. Do basic multiply and divide on one side, and then multiply and divide trig values on the other side.

Greg, you are right that the precision possible with a slide rule means it lends itself better to great circle calculations than it does to LOP/sight reduction. First, I did no ETAs. This was both because of some typical sailboat-type factors, and also by some human factors. ETAs are done more commonly by power vessels that have a bit more control over their speed. We used Expedition route planning software to integrate weather forecasts with the sailing characteristics of our boat in various winds. Out of this, Expedition made hour-by-hour suggestions (which themselves were updated whenever we refreshed our weather data) for what route was likely to give us the best progress toward our destination.

The shortest route is seldom the fastest. A direct great circle route from Hawaii to Vancouver might, during some given week, lead you through the middle of the North Pacific High and - were you without diesel - leave you becalmed for weeks.http://www.expeditionmarine.com/images/Transpac.jpg gives you a feel for what kind of weather data is available, and how Expedition might integrate that with course suggestions. Wind permitting, of course, a great circle route will be your best course to follow.

There is also a human factor at play here that keeps ETAs from having very much precision. Even on a boat with fairly skilled sailors, the first part of our cruise saw a lot of not-very-good course keeping. Now, part of this occurred during the first 3 minutes every time a new person took the wheel. They (and I include myself in this group) would wander all over the place until somehow their head and hands got back in sync with the boat. Plus/minus 45° was typical during this period...and once during the trip, a new helmsman took the vessel through 360° before he got his bearings. This issue was particularly acute at night, and was unnerving in higher winds.

But more serious, in terms of undermining any ETA, was a tendency early on in the voyage to adjust the course to the wind, rather than changing the sheeting of the sails. Guys were just having fun, and chased the wind (almost) wherever it went. This changed when the first of our two water tanks ran dry and we were still only 1/3 of the way home. At that point, people started taking careful course-keeping with enormous seriousness...which gave us the ability to keep a course plus/minus 3° or 4°. During the first third of the trip, when I - who was navigator - said to follow such-and-such course, the response was "Yea... right." Once not only water but food started to run low, my suggestions were treatedas seriously as that of a prophet of God. It was wonderful. So (to get back to slide rules), getting a great circle route from a slide rule that agreed to within a fraction of a degree with what could be had from an electronic calculator was plenty accurate enough. Differences in precision (in the case of the attached sample problem, 0.3°) got submerged in the general s-shaped zig-zagging that is characteristic of a sailboat's course even when being steered carefully. The Hc value, which translated into distance to home, was interesting, but was not used in any but a general sort of way, given the other factors that played into our ETA.

Paul Dokas called attention to Shapeways.com. Thank you, Paul! They are working with equipment capable of a precision that is altogether out of my reach as an individual hobbyist, and it may be possible to begin work on the Mark 1 Navigator's Slide Rule here in 2016.

I have had entrepreneurial ideas that prospered, and ideas that crashed and burned. Manufacturing a slide rule 40 years after the electronic calculator wiped out the entire slide-rule market is probably a project that is destined to crash and burn. But it could be fun. And as Tom Sult said, it could make he a hundredaire. If it turned out, in addition, that one could make it in aluminum, it would be altogether unique.

If you are interested in being kept in the loop as I work on this idea, and perhaps help me brainstorm on how to optimize the ruler for the types of calculations that would be most useful...
(e.g. it would seem that including a B-scale to do square roots might be useful in calculating the distance to the horizon, while there would not seem to be much point in including a K-scale to do cube roots, as cubes don't seem to figure much into navigational equations)

...then please click the button to send me a reply by private email and I will include you in the development process.

I'm with Mark Coady in wishing I knew how to use the log-log scales. I gather Dad used them all the time when he was working. But with him at 93 years old now, I simply waited too long to ask him to teach me. 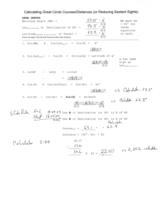 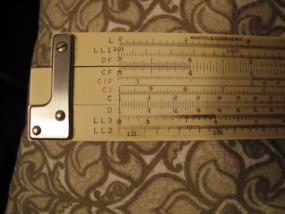 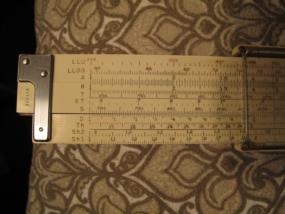 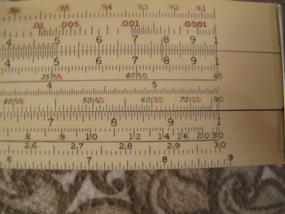