Hewitt Schlereth asked me in a previous thread to send photos of my slide rules, but after seeing the fantastic models some of you people have, I’d be embarrassed.  My first one at school was one of those Faber Castells with the parallel green background stripes.  How many other teenagers were seduced by those green stripes which promised so much?  All my others were made in England by Blundell.  My own, an Academy 302 LOG/LOG, was bought in the early 1960s for the Log/Log scales, but I can’t for the life of me remember why I needed them.  The next two Academies 309 STANDARD and 303 REITZ  (does anybody know what Reitz means?) came into my possession after their previous owners had abandoned them.  I will send two photos of my most recent Blundell, a 401 REITZ purchased from a Government Surplus shop in 2000 for 50p (75c).  Clearly, people weren’t exactly flocking to buy them.  I've included photos of that model, because it appears to have been governmentalised.  It comes in a nice case with a stores reference and section number on it, and it’s supplied with two cursors.  I’m not sure if the second cursor is provided so you can do clever things with it, or simply to provide a spare like all Government paid for torches come with a spare filament bulb hidden inside somewhere, and the best tailors leave a spare button tagged somewhere inside their products.  The only problem is the Government stamp on the cursor rather gets in the way of reading the D scale.   More interestingly, it’s got a tightener at each end of the stock so that you can tighten the slide with a little key.  Is this a common feature at the top end of the market, or do really good quality slide rules not need them?
DaveP 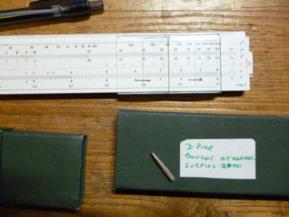 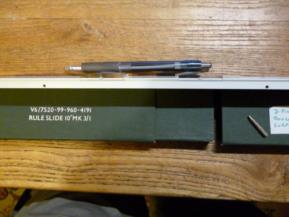