Attached, the Western end of the fort. The starboard strut is just shielding a direct reflection of the Sun (I have another frame which shows the Sun, but the image is blinded out) The fort is about 600' high. The shore is about 2 miles away.  The reflected image of the Sun is a touch under 30°. Halve that, apply refraction, take from 90° to get ZD, apply Dec and you get Lat approx N50°55'. Long is around W0°25'.

This shot shows the underside of the starboard wing, with strut, but also a refelection of the port wingroot, and, I cannot explain this, the footstep for the rear seat which is on the starboard side. These refections cannot be seen by eyes focussed outside.

By some definitions, I am an Ancient Briton myself. At one stage, in my lifetime, the inhabitants of the fort used AAA guns to defend themselves, and heavy artillery to attack passing Huns in the Channel. So this qualifies as using CD in Traditional Wayfinding. 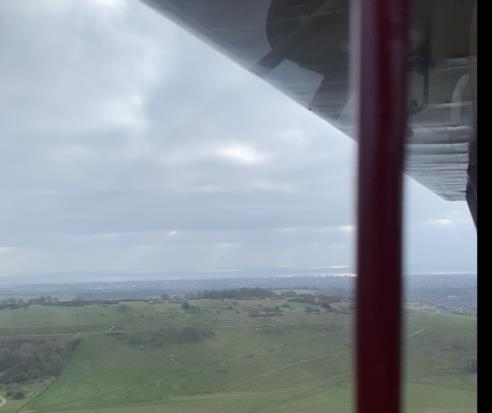