I think it is the real deal, but I also believe that it is specific to the Marshall Islands.  I have one of the swell charts here on my wall that I picked up in the early 1980s when I was a student.  It came with a back story that felt very authentic, and later I had a long conversation with Ben Finney over lunch about these charts and he didn't give me any indication it was other than an authentic practice.

David Lewis devotes much of Chapter 7 in his book "We, the Navigators" to the charts, and it seems that much of what is in the wikipedia entry was drawn from it (but they got the page #s wrong). On page 201 he notes that they were first described by western missionaries in the 1860s, and that there were three kinds of charts:

Meddo: Shows swell patterns in relation to a few islands

Rebbilil: covers a larger area and is more concerned with islands than swells

Mine was obviously made to sell and isn't an antique (tho now being 40 yrs old, I guess it is at least as much an antique as I am!), but was told it was ethnographically authentic, made by a navigation practitioner. And a few years back, a friend asked about it and wanted one, so I looked on the web, etc, and to my surprise, no one seemed to be offering them for sale.

I've attached a pic of mine below. It has the nice touch that the place that sold it to me (it was in  a gallery in Lahaina specializing in Pacific culture ethnographic items) thoughtfully taped the names of the islands on the sticks (1980s typewriter fonts and scotch tape!) so I can compare it to an actual chart/map.  The labels have faded over the decades, but are still quite readable.

Now that you have raised the topic, I look forward from hearing from others on the list! 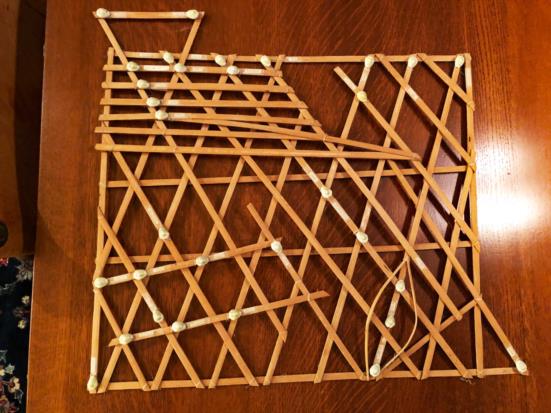