There are few certain things in this world: death, taxes and the passage of the sun across the sky each day being a few scant examples.  To see the latter certain event so abruptly and spectacularly interrupted, was the most astounding natural phenomena that I have been privileged to witness.  My wife and I were fortunate enough to see the "totality" in the state of Oregon in the U.S.A. two days ago.  Alas, there was no time for pictures, we chose to just soak it all in.  However, Navlist readers may be interested to learn that a reporter for the local newspaper approached us as we attended to the partial eclipse with our sextants leading up to the big event.  He asked for a demonstration after he learned what the "weird" devices were and then begged for a photograph of us wielding our instruments.   We acquiesced. 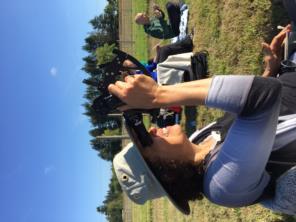