Lots of fun in that video, yes! It's a creation of a very active and talented video-producer. His youtube id is JeffHK. He has lots of videos available including this one with a sextant in it.

In the video with the time-lapse, we start in with the stars rising vertically from the horizon. They do that only relatively close to the equator. We have Altair near the center, and then sunrise not long after. Given the alignment of stars at comparable altitudes, the initial latitude is about 13° N. Given the rough time of sunrise, the time of year is mid-March --year unknown. At the end of day 1, around time stamp 00:27, the stars come out and it looks like Leo is dead ahead. Shortly after a bright planet rises. With images like this, the bright stars are lost among the faint ones, so it can be tough to spot normally easy bright stars like Spica while faint Delphinus and fainter Corona Australis are no problem. The planet is near Spica, as it turns out, and the star theta Virginis is just above it. Checking the past five years at about this season of the year, the only option is Jupiter, and checking the fainter nearby stars, the position of Jupiter locks the date down at March 27, 2017 give or take a few days. I didn't bother checking years more than five years back, incidentally, since this sort of video tech and video-editing quality barely existed more than five years ago.

There are various other familiar constellations visible. Scorpius is visible standing on its tail at time stamp 01:01. And Vega is visible a few times.

At 05:32 the Moon makes its first appearance while the vessel is in port in Singapore. It shows up again in the late afternoon for a couple of days on the voyage to Hong Kong at 07:04, and the next day at 07:59, and the day after that at 08:24. Later on that date after dark, while the Big and Little Dippers are dead ahead approaching Hong Kong, we can pin down the position of the Moon fairly well by skyglow. That implies that the date is now April 6, 2017. The total duration is maybe 10 to 12 days instead of 30. Does that seem reasonable?

At the very beginning of the video, within the first second, it looks like there's a pre-dawn ISS (space station) pass. See the screen capture below. That is a goldmine of navigational information. To do this right, it would be necessary to dig up space station orbital elements for that period, but even without correct elements, there is a viable high pass in the vicinity of 13°N, 60°E at about 0200 UT on March 26, which would be 0600 local time. If done properly, it would be possible to make some rather exact statements about the the position of JeffHK's vessel on that morning.

By the way, if you try to watch this video on youtube on a slow connection, bear in mind that youtube automatically streams a lower-resolution version of the video. Try a youtube downloader like 4K Video Downloader for more options. 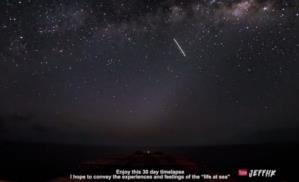