Reply
Re: Time of full moon
From: Robert Wyatt
Date: 2019 Dec 17, 09:25 -0600
It sounds like you're defining "full moon" as "when I see the most illumination of the surface" but the definition is when the moon is in opposition and does not consider whether you can see it.

It seems to me that a full Moon is not a specific instant, but an event that lasts over a period of time.
Because the Sun is larger than the Moon, it must always illuminate slightly more than an exact hemisphere of the Moon's surface. And, because the distance between our eyes is less than the diameter of the Moon, we always see less than an exact hemisphere. So there are two slivers of surplus illumination which will be in view respectively before and after the theoretical exact time, giving a period (two minutes?) of 100% illumination of the Moon's visible surface (ignoring polar areas that may not be illuminated on account of declination difference). Although quantifiable, I doubt that the effect is observationally measurable.
Bill Ritchie.
50N 003W

And Antoine added:
"This is not the official definition, but it is at least as good as the official one since it does have a meaningful and solid physical sense and since it also does NOT depend on the coordinates system being used for such computation."

As I noted in my prior reply, the standard "official" definition of the Moon's phases is governed by geocentric ecliptic longitude (or at least appears to be). This is the standard used by various standard almanacs (see the page from the official publication "Astronomical Phenomena for 2019" below). By the standard definition, the Moon is Full when the difference in geocentric ecliptic longitude is 180°. This happened at 05:12 UT which was 12:12 EST just as the various "whaddaya know" memes stated ("Full Moon at 12:12 on 12-12?? Whaddaya know?!"). Never mind that no observer actually saw that phase at that time (since it's defined geocentrically) and never mind that this is just a quirk of zone time and it was only "12:12" in EST. Numerological memese like these are built on cute coincidences that imply some sort of "good luck" for folks weaned on lottery tickets and slot machines.

Separately, outside the official definition, we can define Full Moon as absolute maximum phase or "full-ness" which is identical to the maximum Sun-Moon lunar distance, LD, since the phase is equal to (1-cos LD)/2, which, for those of you who get a kick out of haversines, is the same as phase=hav(LD). As I noted in my earlier reply, the max geocentric Sun-Moon LD occurs at 12:30 (12:31 is not inconsistent).

I agree that this definition in terms of actual phase is more natural, but it's too late to make changes. Official government-issue astronomical sources have been using the ecliptic longitude definition (the astrological definition) for far too long. There is no reason to change the definition (until we move to Mars... or maybe Saturn). 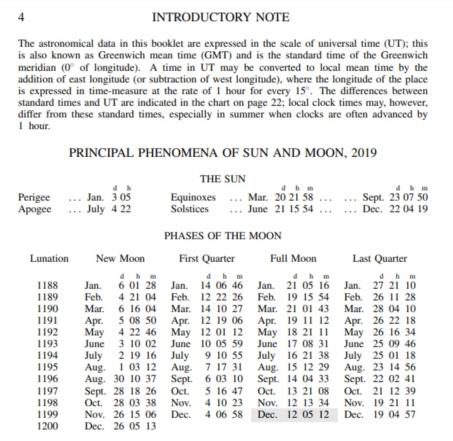