Unless your observation of the body will require a month of readings, I do believe that your time scale is too lengthy!!

Herbert was discussing culmination after meridian crossing of a body.  His estimation of the skew was minutes of time, worse at the poles.  In my reply, I clearly had a decimal point error.  The true rate for a 1 hour period, at maximum, is 1.0 minutes of arc.

You can observe this yourself at the base of the daily pages in the Nautical Almanac, particularly during the equinoxes.  How I managed to change 1.0 into 0.1 minutes of arc is one of the mysteries of my foggy brain!! ;-)

But at or near the poles, since the sun will not appreciably rise and set, but take a path with little altitude variation as it scuds around you above the horizon as the azimuth changes thru 360°, the change in declination will move the time of culmination the most.   I still am hopeful that Herbert will indicate why he considers that important.

Certainly the observations of Scott and Amundsen when at the pole are perfect exemplars.  In neither case did the observations by either party consider culmination as a critical component of proving they were at the pole.  They observed the body relative to time.  The pole became the AP and the resultant boxing of the LOPs (cocked hat) indisputably established achieving the pole.  Those observations have been discussed here on NavList from time to time.

Of course, when that rate is occurring, the sun's true declination is zero!  That places the body at the horizon, when the observer's position is at the pole.   Abnormal refraction is bound to play a significant distorter of observed altitude.  It is a bit chilly at the pole!

The rate of change in the sun's declination is illustrated by the Analemma (see attached).  From 20 May to 21 July & from 22 November to 21 January the the sun's declination changes by approximately 1 degree per month. From 21 January to 20 May and from 23 July to 22 November the rate of change is approximately 10 degrees per month. 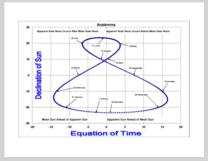 (Analemma.pdf: Open and save or View online)