Previously:
"when I landed in Christchurch and rented a car I could drive around and know where things were because the map was north up - just like driving around Paris or Toyko. "

At first that made sense, but then as I thought on it more... no, not really. For city maps, there are some useful conventions, but it really makes almost no difference whether north is up. What counts most is an alignment with the street grid or with some geographic feature of the city. Indeed, the greatest metropolis on Earth is frequently mapped with some orientation other than true north "up". Quite common are maps like the two attached below --one a real map, the other a famous comedic map-- which do not even show a cardinal point "up" and instead align with the axis perpendicular to the main axis of Manhattan, roughly NWbW, near azimuth 299°. It is natural to align maps of Manhattan such that the streets and avenues match the axes of the map, which places them about 29° off the cardinal compass directions.

Maps of cities built along straight coastlines are often aligned with the coast running left-right. Many maps of Barcelona are laid out this way with northwest (very close to azimuth 315°, exactly NW) "up", and some maps of Chicago, especially older maps, are aligned with west "up". 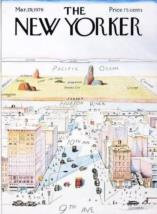 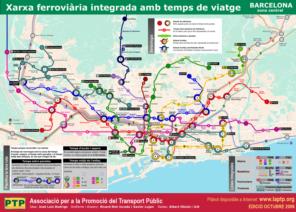 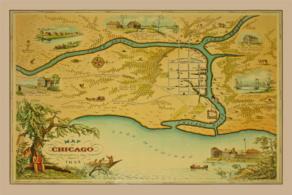