On a recent tour of Lowell Observatory in Flagstaff, Arizona I came across this Thacher's Calculating Instrument in the Rotunda Museum next to the blink comparator that Clyde Tombaugh used in the discovery of Pluto. This slide rule was apparently used by astronomers in the early part of the 20th century. In most other cylindrical slide rules such the Bygrave, Fuller and Otis-King, the scales form helical spirals around the circumference of the cylinder. In Thacher's Calculating Instrument the scales run along the length of the cylinder. It effectively what you would get if you took the scales of a flat Bygrave and wrapped them around a cylinder with its axis lying horizontally. After a fairly cursory look, it apppears to consist of simple logarithmic scales (no trigomonetry) that are a total of round sixty feet long. An interesting variant! 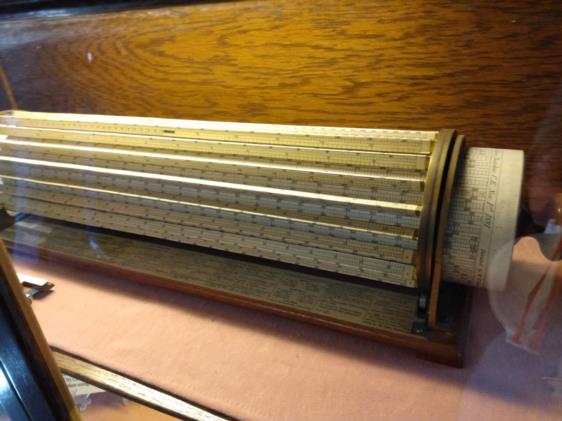