Yes, I debated with myself about whether or not to place the sun closer to the dividing line, where it really should be. My thought process in putting it off to the right was for the sake of clearly illustrating that the image of the sun was in the silvered half of the horizon mirror. I reasoned that the instructor could explain that, in reality, one would do well to keep the image as close to the center of the scope as possible (not only to ensure accurate alignment with the horizon, but also to avoid any distortion close to the edges of the scope's FOV). I also thought about putting a dashed line or faded horizon on the right side. But, again for the sake of simplicity and clarity, I left that out and went with something closer to the graphic Rommel was keen on. I must admit though, I wasn't completely happy with the finished product.

So...attached are two more versions each of the "Light Paths" & "Taking a Sight" graphics. All four have the image of the sun centered on the dividing line with the half on the un-silvered side slightly faded. Two have a dashed line representing an extension of the horizon into the silvered half of the mirror. I'd like to hear everyone's feedback on these. Which do you like more: the original, centered sun, with or without dashed line? Or do you think I should keep the entire image of the sun at one consistent level of brightness? Do you think I should simulate the effect of sun shades on the right half of the images? Any and all suggestions are welcome.

As I told Rommel, I have the images saved in Photoshop with each element as a separate layer, so they're quite easy to play around with. I'd like to arrive at something which most would agree strikes a balance between not being overly complicated and accurately depicting what one can expect to see through the scope of a sextant. Thanks in advance. And thank you, Bill, for getting the ball rolling. :) 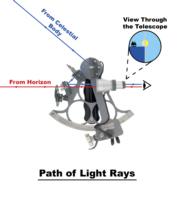 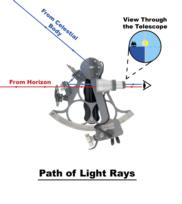 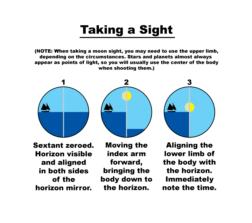 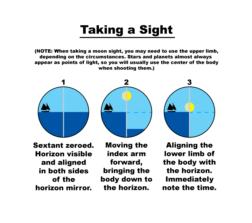