I love graphics that explain complex ideas with intuitive simplicity, and the analemma is one of my favorites.
But it's really only showing the sun's declination over the course of a year and the Equation of Time.   One would have to go to the text typically attached to an analemma to see dates when the sun is in a certain position on the analemma and from those figure out that the sun spends slightly more time north of the equator than south.  -Lu Abel

Using MICA and a brute force approach of simply calculating the Sun's declination at 0h UT for each day in 2015 I get an average declination of +0.39°. The sign of the result is as expected since the Earth is further from the Sun and moving more slowly in its orbit during the northern hemisphere's summer months. The Sun then spends more time north of the equator than south of it.  -Robin Stuart

Funny, I used MICA to calculate the same, but for each week. I then fed that into excel and produced the attached graph. Because I used weeks, the dates are not correct for the solstices and equinoxes, etc. But they give an idea of the time frame for each phase. I had the same thought as David Pike concerning the definition of "average", but I feel I am too ignorant of mathematical matters to speak up, sometimes. :)
Cheers,
Sean C. 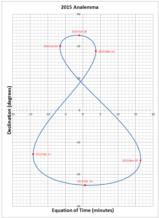