As you have probably learned from a little searching, Kepler's Second Law is a bit of early physics (see animated GIF below), discovered by and first written up by Johannes Kepler himself over 400 years ago. Kepler's three laws of planetary motion were critical clues for Isaac Newton that led to his law of universal gravitation. The Second Law says that a line drawn from the Sun to a planet (or from a planet to a moon or satellite) "sweeps out equal areas in equal times". Today the second law is a little hard to spot in modern physics because it has a very simple and deep interpretation as the constancy of the orbital angular momentum vector for an orbiting mass. No matter how it is understood in physics terms, at its most basic level it says that an orbiting planet moves faster when it is closer to the Sun and more slowly when it's further away.

David Iwancio set himself the task of creating a means of calculating the Sun's semi-diameter, which changes slightly during the year, based on the changing rate of the Sun's angular motion across the sky, which is a direct reflection of the Earth's angular rate in its orbit. The Earth moves slightly faster in January than in July, and the Sun is correspondingly slightly larger in January than in July. In principle this is a clever idea, but in practice I don't see any benefit to it. It depends on exact almanac data for the Sun and quite a bit of computation.

In normal almanac data, the Sun's distance or equivalently its parallax is given and from that the SD is directly proportional. That's easy. If the parallax is not available, there is a quick method for calculating the Sun SD to the accuracy required (0.01') using a simple cosine function, which I described previously:
SD = 16' + 0.27' · cos(0.986° · dDays)
where dDays is the number of days since perihelion. Note that there are small details involving leap years and slight changes in the date of perihelion, and it's only approximately a cosine, but these are not significant issues at the required level of accuracy. And needless to say this level of accuracy is only relevant for extreme calculations beyond the limits of most real navigation. One example where it's useful to get that extra digit: we do frequently need the sum of the SDs of the Sun and Moon accurate to a tenth of a minute of arc during the pre-clearing phase for lunars. If we have these accurate to an extra digit, then of course we reduce round-off error.

You mentioned that you were thinking of the Moon when you first read David's post. That's worth considering. Normally we list the Moon's HP as an independent parameter in almanac data. But how well could we estimate it from the Moon's motion? Note first that the Moon's SD (geocentric) is simply proportional to the HP: SD = 0.2724·HP. So this is the same problem. If we know the Moon SD then we know its HP and vice versa.

Suppose we calculate the rate of change of the Moon's motion across the sky. When it is moving more slowly, it is further away (smaller HP). How accurately can we determine the HP from listed values of the Moon's SHA and Dec? It should be good to some reasonable accuracy. I would bet something like +/-0.3 or 0.5' in the HP (a guess, off the top of my head). It won't be perfect since the Moon's motion is not an example of a two-body problem (and Kepler's Laws are only an approximation for the Moon, see Evection and Variation for an introduction). A method like this would serve no practical purpose (failing for lunars, too), but it might be interesting to see... 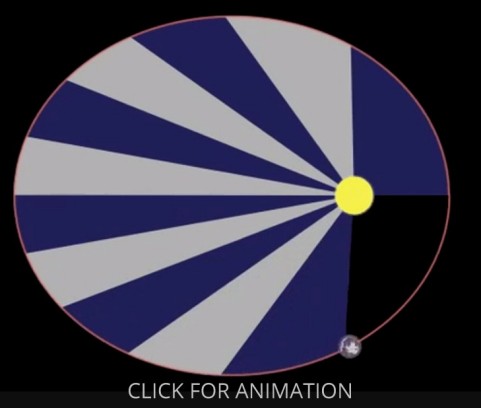