"In English speaking countries does the sun still have a gender or has he been neutered by political  correctness?"

Short answer: No, the Sun does not have a gender in common english usage. But your "or" implies a bit of a false dichotomy. As in, if the Sun's gender is gone, then it must be some nefarious "PC" people who cut off his bits! There are alternative explanations. BTW, I realize you were being funny. I'm just playing along. :)

Referring to the Sun or Mars or Jupiter as "he" and the Moon or Venus as "she" seems antiquarian, quaint, and weirdly anthropomorphic in the modern world, at least in english which lost grammatical gender something like 800 years ago (see PS for some medieval fun). It's nothing to do with "political correctness". Searching hathitrust on a few phrases like "his perihelion" and "her orbit", this usage seems to have been out of favor since the 19th century and even then it was rare.

Myself, I've only seen gendered pronouns used in english for celestial bodies by people who are not native english speakers (they are translating from grammatical gender in their own languages) and now and then as affectations by people that I would describe as... "peculiar".

PS: As promised, some medieval fun. Make your own Bayeux tapestry. Add a nice sailing vessel and maybe a comet or two!
Details here:
http://www.openculture.com/2020/06/construct-your-own-bayeux-tapestry-with-this-free-online-app.html. Web app here: http://htck.github.io/bayeux/#!/. And a snippet from an example with a clever pop culture reference. 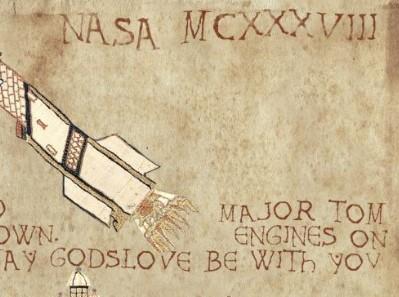