Yesterday the subSun point was at Abu Simbel on the shore of Lake Nasser in Egypt at about 0958 UT. At that time the Sun was at the zenith. I used this as a conversation-starter in my Advanced Modern Celestial Navigation workshop. I showed the May, 1969 cover of National Geographic magazine to illustrate the story (see below). I noticed late last night a nice confluence of topics on this cover. Of course, there's the giant statue at Abu Simbel being re-assembled on higher ground. There's also an article about Apollo 8, the only Apollo mission where celestial navigation was actively pursued. And there's also an article about the Powell expedition a century earlier through the Grand Canyon, during which some lunars were taken in an effort to determine longitude.

The Moon was "big" in 1969, and I could stretch things and add one more connection though a bit tenuous. There's an article about grunion spawning, and grunion runs are synchronized with the phase of the Moon (apparently they use tiny sextants to measure the lunar distance angle before deciding to wiggle up onto the sand to do their thing). 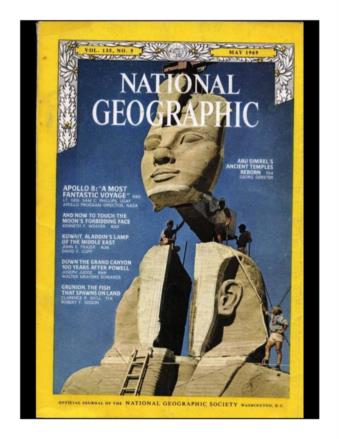