Reply
Re: Sun and moon at the North Pole.
From: Brad Morris
Date: 2019 Jan 29, 23:57 -0500
Frank
I really had no idea about Hevelius.  I saw the image and thought, gee, that was too easy.  And I guess it was.
Attached find a much better candidate image.  It shows the phases of Mercury.  The phase on the far right is labeled 14%, which meets the requested threshold of 20% or less.  For accreditation, I found it in image search, attached to this website somehow
http://www.hvezdarna-slany.cz/news/obloha_unor_2013/obloha_unor_2013.html
Brad

The drawings were apparently produced in the 1680s or later, but the dates on them are in the 1640s. So that's an issue. They are engravings made decades later from the old records of the Polish astronomer Hevelius. We can compare these drawings with modern simulations (in Stellarium, e.g.). They don't match. That's very strange. My first thought was perhaps there was some calendrical issue, but Poland was a Catholic country (still predominantly Catholic today, of course) so they changed to the modern calendar some sixty years earlier. That's out. So what next??

Quite random Googling provided the answer. It was news to me: the observations of the phases of Mercury by Hevelius were famously erroneous. He had developed a clever technique to resolve the tiny disk of the planet which proved to be a bad idea. See the attached description...

As I say, this was all news to me and certainly interesting so well-worth the time spent on it. 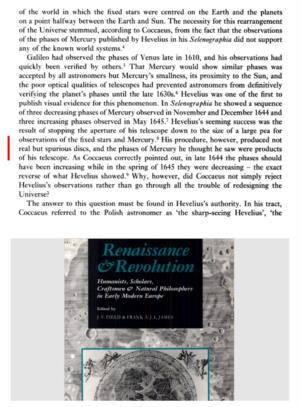