Rommel, you wrote, "That I think, is one of the newer USN littoral craft."

It certainly resembles a couple of them in a general way, and I, too, thought it might be one of those "littoral combat ships" at first, but I have positively identified the vessel in the photo as the USS John P. Murtha which is an "amphibious transport dock ship" (it delivers and supports US Marines and their hovercraft and Osprey tilt-rotors and other weapons where they are required). Since this is off-topic, I will point you to the Wikipedia article on the vessel which has loads of links and details: https://en.wikipedia.org/wiki/USS_John_P._Murtha. They also have a Facebook page https://www.facebook.com/USSJohnP.Murtha/ which includes the photo attached below. This photo was instrumental in confirming the ship's identity since it was taken just two or three minutes before mine from that same Osprey that was landing on the deck. As in my photo, you can see Castle Hill Light in the distance, which is very familiar to boaters who have sailed out of Narragansett Bay. 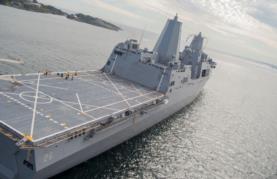