Stan K, you wrote:
"I'm getting a stiff neck just thinking about these."

Ha ha! Yeah, they're up there.

While I'm thinking of it, some of you may have noticed that the latitude in Bob's image is displayed as 0° 00.002'. which might seem to imply that he wasn't quite on the equator. But convert that to feet. There's about 6000 feet per minute of arc of latitude (and also longitude for locations in the tropics), so 0.002' measures out to 12 feet. And you notice that the displayed accuracy of the GPS fix, as reported by the chipset within the phone, was also +/- 12 feet. The position is thus consistent with a location exactly on the equator. This would be the geodetic equator on the WGS84 datum. Astronomical latitude, such as we get from an altitude of the Sun, would differ by the amount of the local deflection of the vertical in the north-south direction which could easily amount to a few hundred feet on the ground.

PS: Today's fun with smartphone apps. There was a helluva loud noise south of the island here today... sounded like a couple of helicopters doing a rescue or something. I looked on the MarineTraffic app and saw that there was no unusual activity except the pilot boat right at the entrance to the bay. To me that spelled "Yvan eht Nioj" because USN vessels don't normally show up on the AIS (sometimes, yes, but not normally) so I hopped in the car and went down to the cliffs. Sure enough, a big amphibious landing ship, which I later determined was the brand new USS John P. Murtha (scheduled for commissioning two weeks from now), was heading slowly out of Narragansett Bay and an Osprey tilt-rotor was landing on her deck, probably to impress some participants in the Seapower conference which was being held in Newport. I stayed long enough to see the Osprey take off and transition to level flight, which was fun. The smartphone also took the photos, of course. Here's one: 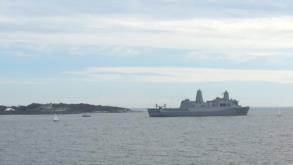