Gary LaPook, you wrote:
"No, the "Universal Plotting Sheet" is only a form that is intended to be used by a navigator to make a "small area plotting sheet" so it doesn't have any projection of its own. "

Only a form? Huh. That's a peculiar statement. Must be yet more confusion over terminology. In this case that's understandable since this is an informal term. I'll refer you to Greg Rudzinski's post from July 2014:
http://fer3.com/arc/m2.aspx/Plotting-sheets-Rudzinski-jul-2014-g28266

In that post, he included several universal plotting sheet pdf examples. Here's a couple of them: 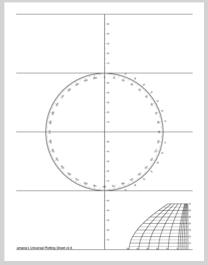 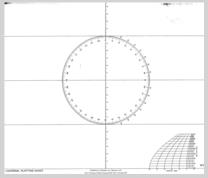 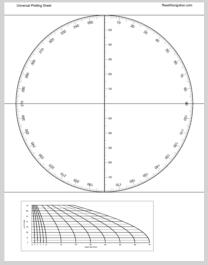 You'll note that the second of these is from Celestaire. The third is from ReedNavigation.com (me).

By the way, your conclusion here is exactly the point. The plotting sheet doesn't have any projection of its own (in the sense of a named projection). The projection of a conformal plotting sheet is simple longitude-scaling by the factor cos(lat). And that's all it is. It's not Mercator or Lambert Conformal Conic or any of the others, or, if you want to think of it differently, it's all of those at once. You don't need a Mercator chart to plot lines of position with the intercept method, and standard plotting sheets for the intercept method are not Mercator charts and do not represent the Mercator projection. It's not "kinda sorta" Mercator. It's not "basically" Mercator. It's simply locally conformal.