The sky was blue all day today so I took the opportunity of taking a set of 11 AM sights and a set of 8 PM sights. The PM sights were taken with equal altitudes in mind.

My intention is to use the sights  in various ways:

Meridian and an ex-meridian sights will need to wait a few months as I am in the southern hemisphere using an AH.

The easiest method is longitude by equal altitudes so that  is what I worked first.

If you have ever done an equal altitudes sight you will know that the sun does not stop for anyone - hence the subject line. You have one brief moment to get the sight and then it is gone forever. Contrast this with a meridian altitude where  you have several minutes to take the sight.  The reason I took only 8 PM sights was because the sun was too fast for me three times (-;  Rule number one of planning equal altititude sights is to space the AM sights so that you have time to write down the time and re-set the sextant between PM sights.

My sextant has a small mirror and I found  keeping the two images in view while waiting for the limbs to touch very tiring. Sod's Law seemed to apply. Just as the limbs were about to touch my arm would give an involuntary jerk and by the time I had found the images again they were starting to overlap. That possibly explains why some measured LAN times were later than they should have been.

I was disappointed in the results (see attached file). I suspect that when I calculate the intercepts the AM sights will be more accurate than the PM sights. That is because in the AM I set the two images a small distance apart and then waited a few seconds for the limbs to touch.  In the PM the starting distance was much greater and (with the exception of some short breaks) I had to continually hold the heavy sextant and watch the images for fear of missing the limbs touching. (See the subject line!)

To take accurate equal altitude sights  the sextant should be mounted on a tripod or better still a theodolite used. Also the conversion from LAN to GHA needs to be checked. I used the Aeronautical Almanac in which the interpolation table gives angle to the nearest minute or arc. 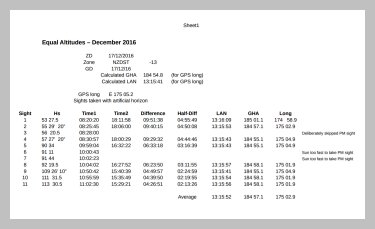