Veterans Day in the US and Remembrance Day in Commonwealth countries are celebrated on November 11 which was originally known as, and still is known in many countries as Armistice Day, the anniversary of the armistice that ended the Great War or First World War (at least those portions of the war in western Europe). The armistice came into effect and the "guns fell silent" on the Western Front famously at 11:00 am Paris time, and thus it was the "eleventh hour of the eleventh day of the eleventh month". Many memorials add another "11" to this and mark the time of 11:11 as the instant to be noticed.

In Anthem, Arizona there is a veterans memorial that acts as a once-a-year sundial of sorts. At 11:11 am "Mountain Time" (about a minute ago, as I write this --see PS) the memorial shines a circle of light through five pillars. See the article here for photos:
http://twistedsifter.com/2014/11/anthem-arizona-veterans-memorial/

For celestial navigation enthusiasts, some things to consider: how does it look the day before? Or the day after? A minute before or after 11:11? And is it affected by the leap year cycle? Did the designers have to correct for refraction? Can you think of any other issues?

Frank Reed
PS: As I was composing this, I wanted to make sure that the memorial worked with Mountain Standard Time, so I went to Google and typed in "Arizona Time". Google then displayed "11:11". I was puzzled and thought it was trying too hard to read my mind. Then I realized that, just by chance, I was asking for Arizona time at the exact minute when the sundial does its trick: the eleventh minute of the eleventh hour of the eleventh day of the eleventh month, at least in Arizona. A coincidence! 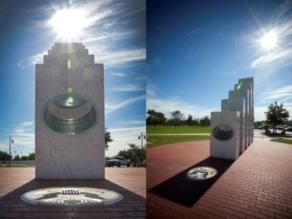