+>>it would seem that the military universal sun compasses were only of use up to latitudes of about 45 degrees. A Bagnold type of sun compass for which a card could be pre-drawn would have been a possibility.<<

I was looking at a website that was trying to unpack the math behind different sorts of sun compass, and it suggested that it was "obvious" that the vertical-gnomon style of sun compass/sundial (called analemmatic) was of greater use if you were close to the equator, and "equally obvious" that a slanted-fixed-gnomon style of sundial was of greater use if you were further from the equator.

Neither of these things were "obvious" to me from the explanation.

But I have made my second sun compass, this one from wood rather than a CD case, with a thinner string for a gnomon (giving a more precise shadow).  I have also added a pointer to it to make it easier to take bearings...and it seems to be accurate to the nearest degree when I compare it to bearings taken with my hockey-puck style of hand bearing magnetic compass.

I am printing the face of the compass on a self-adhesive Avery 5931 CD-label template.  A friend of mine with a 3D printer created the pointer.  Allegedly, the file he gave me is something I can take to any of the branches of the Edmonton Public Library which have 3D printers, and get more made.

The #1 application for this, for me, is to actually MAKE a deviation card for a yacht...something every navigation book says we all need, but in 35 years of sailing I have never seen one.  I once tried for a full hour to gather data for a deviation card using a range defined by two navigational lights, using a pelorus.

No matter how slow we went, when cutting diagonally across the line of the range, we only had a second or so to read the pelorus...and we were simply not skilled enough to make it work.

So far, it looks like using a sun compass is going to be easier than using a pelorus.  You can settle the boat onto a course, line your sun compass up on the proper local solar time, and align the pointer with the centerline of your yacht.  Correct for variation and get deviation.

I went out in my car to "swing the compass" and found that I could steer the vehicle in a circle in a parking lot and check the deviation of my hand magnetic compass in no time at all.  I look forward to trying this in the summer while afloat.  I shall be sailing a 26 foot pocket cruiser on a lake...but the lake is still ice-covered so far. 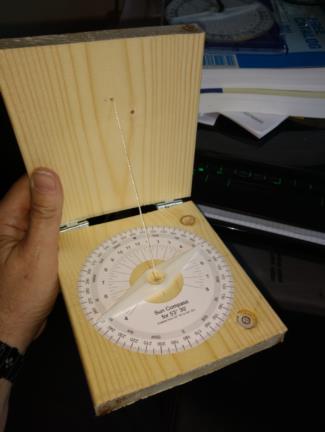