Reply
Re: Summer Solstice
From: Brad Morris
Date: 2016 Dec 23, 09:37 -0500
David
That is an interesting point!  Adjust the mirror of the AH.  There is nothing to theoretically limiting in the concept.
I think there may be some practical considerations.
Firstly,  the angle the mirror takes, in the observation plane, with respect to the horizon, should be known to the same resolution as the observation.  We usually record at the 0.1' of arc.  We would need to know what angle the mirror was tilted to, in order to reduce the observation.  We assume 0° in the nominal AH arrangement, we cannot do that in the new arrangement.  So there must be some method to determine that in-plane tilt, to 0.1'.
Secondly, the mirror tilt must be all in plane.  Any 'side tilt' would affect the measurement by the cosine of the out of plane tilt.  We avoid this in the nominal AH arrangement because the plane of the mirror is parallel  to the plane of the horizon.  The mirror could still be set such that, perpendicular to the observation axis,   a line thru the mirror plane remains parallel to the plane of the horizon.  It presupposes that we know the azimuth of observation, else we inject error.  As the error introduced is by the cosine of the out of plane tilt, this has reduced sensitivity.
To take the observation, we would place the AH mirror such that at the moment of observation, the in-plane tilt is known to 0.1' and the out of plane tilt is held to a minimum.  We will have arranged the tilt to be nearly all in plane, by planning for the azimuth of the intended observation.
These are not insurmountable issues, but should be considered.
Brad
On Dec 23, 2016 6:55 AM, "David Pike" <NoReply_DavidPike@fer3.com> wrote:

DavidC you wrote:  My problem is that for several hours a day the altitude of the sun is too high to observe it with an AH!!!

I seem to remember this came up a while back.  My solution (theory only never tried), which came up as an offshoot of some work I was doing on the effects of tilt errors on a mirror AH, was that if, you could set the mirror accurately to any angle, you could get rid of 20 degrees of height sextant required for every 10 degrees of mirror tilt.  It did rather look as if you might possibly have to place your body in a rather unusual position in order to do the shot.  Appologies if I,ve use this photo before.  Dave P 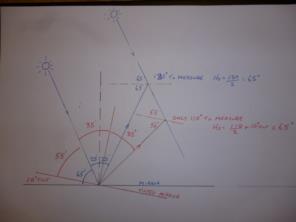