When I was testing the DaveP patent plate glass mirror AH, salvaged from a National Service Airman’s wardrobe, I got into a dreadful knot over whether to use 1/2 , full, or twice SD and whether to add or subtract.  I worked it out in the end using drawing and managed to remember what I’d proved for at least five minutes.  I hope it didn’t involve using whatever correction made the PL come closest to my GPS position.

However, by that time, I’d got so goggle eyed, and the Suns were so even, that I almost lost track of which Sun was which, so I might have been shooting top to top instead of bottom to bottom without realising which and applying the SD in the wrong direction.  In the end, I found using Sun on Sun was much more practical and honest, although by that time my arm was getting tired, so it was more ‘Sun through Sun’, which seemed to work almost as well.  DavP 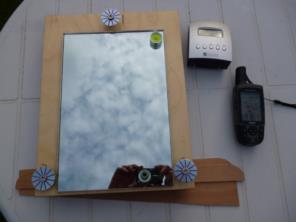