A star travels around the sky on a small circle, unless the star has exactly zero declination. We can draw a ray from the top of that stick that we hammered into the ground to the star, and in the course of the day the star will travel around that small circle, and the ray will sweep out a cone with its apex at the tip of the stick. The central axis of the cone points to the celestial pole. In the case I've drawn below, it's the north celestial pole (NCP). The angle from the axis of the cone to the star at any time (the radius of the small circle or the apex angle of the cone) is 90°-Dec.

If the observer is at the geographic pole so that the celestial pole is straight up, then the cones have their axes vertically aligned, and the shadow cone intersects symmetrically. The shadow is a circle. Makes sense. If you're at the north pole watching Vega, it travels around the sky at a fixed angular altitude equal to its Declination, so the shadow from the stick will sweep around in a circle during a single sidereal day.

When would you get a perfect parabolic shadow curve? 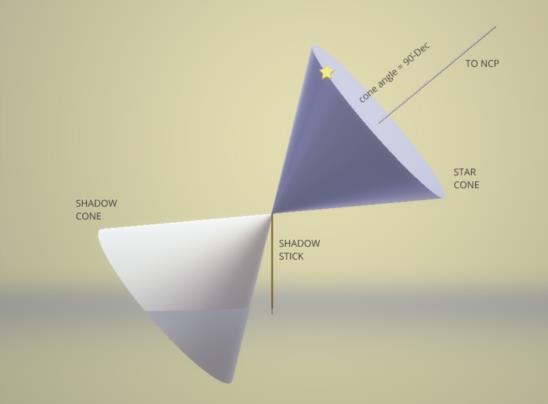