Tonight should be a good night to see the recently released set of Starlink satellites. They're still relatively low and separated by only about ten seconds. Watch the northwest after about 6:15pm Eastern Time, and you'll see several dozen satellites running along in a stream. Each satellite will be about magnitude 3.0 so bright enough to see without optical aid under dark skies if you have given yourself 5-10 minutes to dark-adapt.

Exact pass details help. Visit heavens-above.com for detailed predictions. This will get you started: https://www.heavens-above.com/AllSats.aspx?lat=41.33&lng=-71.98&loc=Mystic+CT&alt=0&tz=EST. Those of you in other parts of the world won't see this set of passes tonight, but you can plan ahead for the next opportunity.

For visual navigation, you could use these satellites to get a good line of position parallel to the ground track which runs SW to NE passing almost directly over the northwest corner of the state of Massachusetts. A single-point fix based purely on the Starlink group would be tougher since there are so many satellites all basically indistinguishable to a visual observer. Another satellite, Cosmos 2219 (r), with a pass around 6:24 will be nearly perpendicular to the Starlink group. Throw that one, and you can get a fix.

Reminder: for a visual satellite fix, you don't need a sextant. Just get some pass predictions for points bracketing your position, and then note visually (binoculars help) where the satellite passes relative to star patterns (which you can identify in advance). For example, that Cosmos satellite tonight will cross Cassiopeia. It will run down one side of the W at longitude 71°W, near the far end of the W at longitude 73°W, and right down the middle at 72°W. With binoculars, you would be able to determine your longitude within a mile. This satellite is over 800km high, which implies somewhat low position resolution on the ground. 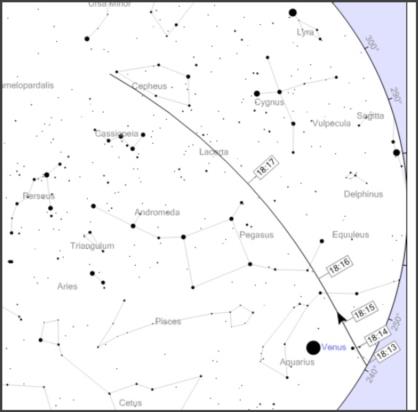