Late on a winter evening in a mid-northern latitude, you look up in the southern sky about 35°-55° high, under a mostly overcast blanket of clouds. There's just one clear gap in the sky about ten degrees across... And in that gap you see a "stick-figure man" constellation, as below... something unfamiliar. This happened to me recently. I puzzled it out after a minute. Can you identify these stars, without "cheating" and tossing it into pattern recognition software? Note that the star at the "head" of the stick man was around first magnitude. This had to be a well-known star, and that's important if you think about this as a navigation puzzle. If it's as bright as that, it surely has a 'common name'.

I want to emphasize that I am illustrating as accurately as I can something that I actually saw. I looked up in the southern sky, not long ago, under almost complete overcast and saw this 'stick man' constellation. 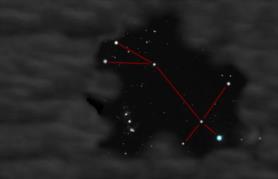