I agree.  I now see that US terminology “time sight” , usually lower case, means what UK often called longitude by chronometer.  The time bit refers to calculating a time in hours, mins and secs, to compare with the almanac figures, then given in Right Ascension hours, mins and secs., not the use of a watch.  UK often added Intercept Methods chapters to differentiate the “new navigation” Marc St Hilaire method from a traditional time sight.

My modest boat is only big enough for one almanac, and that was Reed’s.  When checking other text books, as advised by Frank Reed, it was bad luck to start with Norie’s, and the attached !  If I have stepped on anyone, I apologise.

Reed’s continues to use versines, and ABC tables ( started by New Zealander Blackburne in 1873!) a century later. Burton’s also used versines, so I wonder why that is so,  if haversines are so good.

The recent magnificent analysis by forum members of Capt Worsley’s voyage led me back to my 1966 Bowditch, P 524, where the equations used by Capt Worsley are noted.  Unusually for Bowditch, no derivation or accreditation is given. I wonder if any of our friends who drive on the other side of the road can help here.

I am surprised not to find any other traces in my UK manuals of the time sight calculation methods used by Capt Worsley, a NZ born master in a UK ship, which Frank says were most common back then. Perhaps mine are too recent. Even my Inman’s, I believe he invented haversines, moved on to the intercept method. I do find plenty of mentions of using the prime vertical, if available, to reduce calculation.

So, it’s just two definitions in the same language.  We’ d better not get into astro and CN! 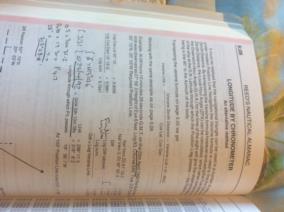 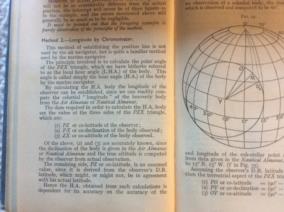