I’ve been pondering the implications of your comments earlier in this thread;

“Navigators did not worry about taking sights on the prime vertical for local time except in relatively rare cases.”

“there is a standard practice of taking sights at some fixed time of day, typically 9am and/or 3pm”

With regard to the first: I wonder to what extent the navigator got to choose the procedures that were followed. If I were a ship’s owner I think I’d probably want to some qualified party to take a look at the log and check that the navigator is following best practices to protect my valuable asset. If he’s not making his time sights at the prime vertical when the opportunity existed I might ask why. This would presumably only make sense in an age when the chronometer was reasonably reliable and the uncertainty in latitude became a significant factor. One might think that observations on the prime vertical would become more prevalent as chronometers improved but your statement that your survey spans the “19th century through the early 20th century” suggests not.

With regard to your second: I always had in mind the image of the navigator stood to attention just after the crack of dawn ready to take time sights when the rest of the crew are still snoozing in their hammocks. Sights on the prime vertical cannot be made for more than half the year (when latitude and declination are contrary name) or if you are in the tropics at a latitude lower in the Sun’s declination. I’ve plotted (hopefully correctly) the local apparent time (noon at 12h) when the Sun is on the prime vertical and find that things are not as onerous as I was imagining. I’ve assumed an altitude cutoff of 10° why the  5° curve ends at around a latitude of 30°.

So my question to you is how certain are you that at the “fixed time of day typically 9am and/or 3pm”, the Sun is not near the prime vertical. Is it something that was unerringly followed throughout the voyage through periods when prime vertical sights were and were not possible or did it drift? Unfortunately, unless there’s a shortcut I don’t know about, the azimuth can’t be immediately read off from the numbers in the time sight reduction but it requires a separate calculation to be made. It was therefore an eye opener when I carried this out on Worsley’s log. 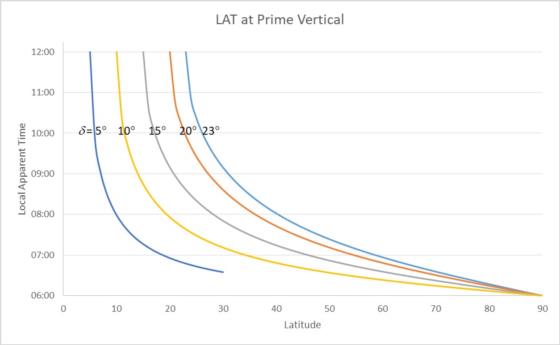