I took a few minutes to check my claim that Elon Musk was a recent addition to that "camping out in Utah and pretending it's Mars" thing. It appears Musk is only a minor player and funded the addition of an observatory. The "Mars Desert Research Station" has been entertaining graduate students since 2001. Sheesh... Seventeen years. I'll bet some of the first participants in these simulations fully anticipated that real astronauts would be standing on Mars twenty years later... in 2021. Not too likely.

I also discovered that the Davis sextant we see in the video has been in use out there in southern Utah since at least 2006! We could have been to Mars and back three or four times in the dozen years that they've been fiddling with that plastic sextant. The report in the article (image below) at least provides a more celestial example of its use, and in the photo we can see someone using it for a noon latitude. The description says the photo was taken on about March 22, 2006. The latitude of the camp is 38.4° N so the doubled noon latitude (for an artificial horizon sight) would have been about 105°, and the position of the index arm in the photo looks consistent with that. So +1 for a genuine photo. 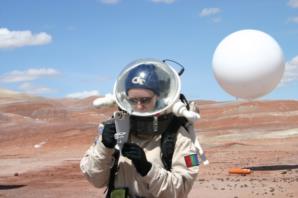 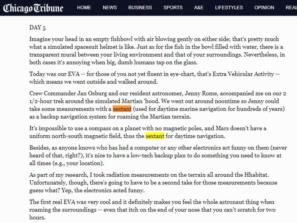