Geoffrey, you wrote:
"I suspect that Professor Brian Cox, ex pop star, TV personality, professor of physics at Manchester university, does not know what a sextant is for or how to use it. All he knows is that it can be used to find out where you are. There he is out on the surface of Mars somewhere (Utah desert) trying to find his way back 'home'."

Yes indeed. It's Utah! For the record, the program does not suggest that Brian Cox has any clue what those kids are doing with that sextant. It also does not suggest that those kids have any clue what they are doing with that sextant! In any case, for this martian "simulation", it's more about giving the participants tasks to perform and record and judge their performance after a few weeks cooped up in a smelly tin can than actually getting any navigation or surveying done.

Nice find! By the way, for everyone looking at that earlier screen cap, and the one below a few moments later (higher res, slightly better view of the sextant), this is not Brian Cox manipulating the sextant. It's one of those "French and Belgian graduate students". The sextant activity apparently is not included in the youtube clip. It comes a few minutes later in the full program.

The program makes a point of noticing that Elon Musk is the money behind this rather odd little camping trip in Utah, but I am fairly certain the project was around before Musk came in to pick up the bills. For him it's just good p.r. for his grandiose Mars adventure. 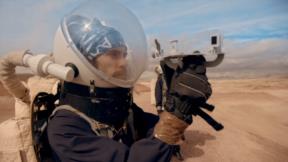