there is a US patent on "Spherographical Navigation" by D.A. McMillen et al.
See 2,619,726. This patent describes that method and the sphere that goes with it. Also, it contains abt. 20 references. So similar methods must have been considered at the time.

I also own a small booklet by Dirk Brouwer, Frederic Keator and D.A. McMillen with that title. McMillan, NY, 1944. From what I gather from this book, the original inventor was a Swede, Anton Stuxberg, who worked at the Instituto Astronomico e Geopphysico de Sao Paulo, Brazil. See the attachment for a copy of the cover.

No other than Weems wrote a complementary foreword for it. And rightly so.
The booklet is a marvel in clarity and rich of examples and beautiful drawings - all written in textbook format and delightful to read. Even though no one is likely to use such a sphere today the book is still a great introduction to CelNav and particularly to sight reduction.

Henry Halboth wrote:
"I recall attending a lecture in 1942 at Seamans' Church Institute, New York City, on the subject of "Spherographical Navigation", wherein a system of navigation was demonstrated utilizing a specially coated bowling ball sized sphere and attached or supplementary micrometer devices for accurately (?) plotting the geographical position of a celestial body and from that position sweeping a circle of equal altitude and thence reading off the position established by the intersection of multiple such circles. I do not recall the claimed accuracy of this system, however, do know that it was not employed on any US vessels. "

That's wonderful! It's a small world. This was one of the pet projects of F.W. "Fritz" Keator. Professor Keator was a Yale engineering professor, a former commander of the US Power Squadron, and he later became the first director of the Seaport Planetarium, now the Treworgy Planetarium at Mystic Seaport (see the attached image, below). It's very possible that the presentation you saw in NYC in 1942 was given by Fritz Keator himself.

The system as designed was supposed to solve the problem of crossing circles of position directly. As I noted recently in my post with a photo of a marked-up orange, it's easy to get accuracy of a couple of degrees even on a vaguely spherical piece of fruit. Ordinarily to improve the accuracy, a much larger sphere would be required. The system developed by Keator and his partners instead used micrometers to measure out the zenith distances with great accuracy and get the position on a relatively small sphere. Although it's neat to see such a thing done, it's an extra device that needs to be maintained, and in the end, logarithms and other tables just aren't that hard. These mechanical devices have appeared many times in the history of celestial navigation (Wolfgang Köberer presented a nice account of some of this history at the "After Longitude" conference at the NMM, Greenwich, UK in March, 2012). But these analog computers have never solved a problem that was not already solved by efficient paper calculations. 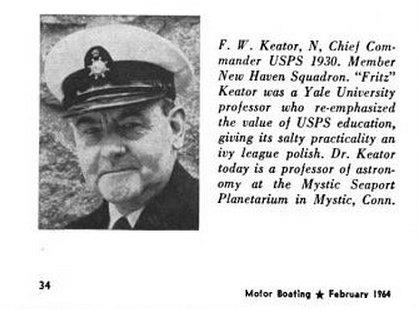