Reply
Re: Speed of Sunset
From: Gary LaPook
Date: 2016 Sep 30, 23:05 +0000
There's no mystery about the difference in time period for sunrise based on latitude and declination. All you have to do is look at the rate of altitude change which varies with the change in azimuth around the time of sunrise which is amplified by the change in refraction at low altitudes. Looking at the simplest case and ignoring refraction, on the equinox , September 22, 2016 the sun rose on the equator at 0555 on azimuth 090 and one hour later the azimuth is still 090, the sun went straight up. The rate of change in HC (not Hs) was 15-00.2' /hour. At 45 degrees south the sun also rose at at 0555 at azimuth 089 but one hour later the azimuth had changed 10 degrees to 079 and the rate of altitude change of Hc was 10-33.0' only 2/3rds the rate on the equator. Doing the same comparison on the solstice, December 22nd, at the equator the sun rose on azimuth 113 and that changed to 114 after one hour and the rate of Hc change is 13-44.0' per hour. At 45 south it rose on azimuth 124 which had changed to 114 after one hour and the rate of Hc change was only 9-15.5' per hour.
So, no mystery.
gl
From: David Pike <NoReply_DavidPike@fer3.com>
To: garylapook@pacbell.net
Sent: Friday, September 30, 2016 2:23 PM
Subject: [NavList] Re: Speed of Sunset

Sorry for the late post.  I’ve been at the Lincolnshire Showground for the last three days confusing ten year olds about finding the size of the Earth with a GPS receiver and a trundle wheel.  I’ve never really thought about the duration of sunset, but I do remember being taught long ago that the duration of twilight varies with both latitude of the observer and the declination of the Sun.  It strikes me that the nautical twilight zone is like one big stretched out sunset, approximately 12 degrees of arc compared to 32 minutes of arc (if you neglect the effects of refraction).  That’s a 24x stretch, so anything true for the duration of twilight, is probably also be true for the duration of sunset.  The reason, at least for different latitudes, is that whilst the Sun’s altitude is measured with respect to the perpendicular to the observer’s horizon, time is measured by the rate the Sun crosses the Earth’s meridians, so the more slanting one plane is to the other, the longer the duration of twilight (and also sunset).  This is easily shown pictorially as in Figure 1 below, and several navigation books use similar diagrams.  The changing duration is also easily spotted by observing just one daily page of the Nautical Almanac. The variation of the duration of twilight with declination is, in my opinion, harder to demonstrate pictorially, and I think many books find the same.  At least one falls back on the well tried phrase “It’s obvious that …..”.   Fortunately, the variation with declination at say 50N, 0N/S, and 50S is clear from observing three daily pages of the Nautical Almanac around 22Jun, 23Sep, and 22Dec (Figure 2 Below).  Interestingly, while the duration of twilight differs with changes in declination, it only does so at significant values of the observer’s latitude.  If the observer is at 0N/S the change in duration of twilight with declination is minimal, and the actual duration equates very roughly to the Earth’s rate of rotation of 15 degrees per hour.  Therefore, the problem becomes how to show why the duration of twilight differs with declination at a significant value of latitude.  60N suggests itself from a trig function point of view, but there’s the possibility of permanent twilight around the summer solstice, so let’s use 45N.
It will be seen from Figure 3 that whereas the loci of the observer’s horizon and the Sun at dec = 0 degrees are great circles; the locus of the Sun about the meridians at any other value of declination is only a small circle centred on the Earth’s axis of rotation.  Projecting the twilight zone onto the smaller circle doesn’t seem to affect the number of meridians the Sun crosses, but the section of small circle is slanted more into the projection of the twilight band, and this will increase the number meridians that the Sun crosses whilst traversing the twilight zone, so the duration of twilight at latitude 45N (in this case) increases with declination.  By adding to the diagrams, you can see that the same is true for summer and winter.  The same should also be true of the duration of sunset.  DaveP.
Attached File: 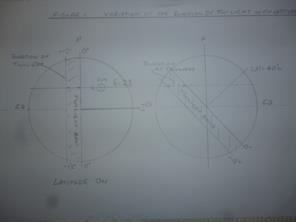 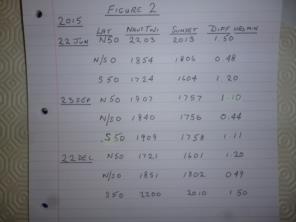 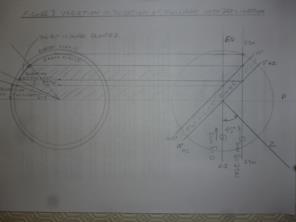