I apologize. I misspoke twice in my previous message. That surely did not help. Please read "horizon" where I said "terminator". So, the first paragraph should read:

And it's easy to demonstrate: All you need to do is to draw a meridian in your Fig.1 through the point where the sun is cutting through the Small Circle labeled "-12". Done. You will immediately see that this meridian cuts the equator farther than 12 deg away from the horizon. The picture is actually easier to draw in the left diagram for the special case where lat = 0 than for the general case in the right diagram, where you have to draw two meridians (a second one through the horizon)!

As a punishment for myself and so that we may have no more misunderstandings, I have drawn it into your picture and attached it. It looks terrible. I can't draw curves with a mouse. Anyway, sorry for the confusion.

That being out of the way, here is what I don't understand:

>> A glance at the NA, or my Fig2, shows that the duration of twilight hardly changes between solstice and equinox at latitude = 0 whereas using your explanation as described with respect to my Fig1 it should. <<

Why do you keep insisting that nothing changes at lat = 0, when even your own data clearly shows a change of 4 minutes for the entire twilight of 44 minutes!! That is 9%, (which is, surprise, surprise!) equal to 1 / cos(23.4deg), and corroberates the 2.15 min change for the actual nautical twilight of 24 min that I had spoken of, and which agrees somewhat with Norm Goldblatt's sunrise figures: 150s / 141.

I will have more comments later, right now I only want to get the error correction out so that you don't wonder too much what in the world I am talking about. 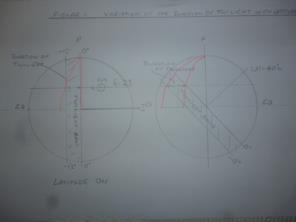