David, I apologize. I misspoke twice in my previous message. That surely did not help. Please read "horizon" where I said "terminator". So, the first paragraph should read:

And it's easy to demonstrate: All you need to do is to draw a meridian in your Fig.1 through the point where the sun is cutting through the Small Circle labeled "-12". Done. You will immediately see that this meridian cuts the equator farther than 12 deg away from the horizon. The picture is actually easier to draw in the left diagram for the special case where lat = 0 than for the general case in the right diagram, where you have to draw two meridians (a second one through the horizon)!

Don’t worry about ‘Terminator’; I sketched in the meridian to the Equator anyway.  What confused me was that I forgot that when I drew Fig1 I was only using it to demonstrate the effect of latitude so I exaggerated the width of the twilight band. (I actually lined up with the big square inside my Douglas protractor and pencilled along the outer edge (good old Douglas!)).  I’ve redrawn the -12 degree line to scale (below), and that makes the movement of the meridian line with changes in the Sun’s declination at latitude 0N much less and more like 9%.

That being out of the way, here is what I don't understand:

>> A glance at the NA, or my Fig2, shows that the duration of twilight hardly changes between solstice and equinox at latitude = 0 whereas using your explanation as described with respect to my Fig1 it should. <<

Why do you keep insisting that nothing changes at lat = 0, when even your own data clearly shows a change of 4 minutes for the entire twilight of 44 minutes!! That is 9%, (which is, surprise, surprise!) equal to 1 / cos(23.4deg), and corroberates the 2.15 min change for the actual nautical twilight of 24 min that I had spoken of, and which agrees somewhat with Norm Goldblatt's sunrise figures: 150s / 141.

When I said ‘hardly changes’ at 0N I meant compared to the situation at 50N.  That is, 4/44 or 9% at 0N compared to (1hr50m – 1hr10m)/1hr10m or 57% at 50N.  This was loose talk by me I’m afraid.  However it does mean that the size of changes in the duration of twilight caused by the Sun’s declination is also dependent upon the latitude of the observer.  My Fig3 is drawn to scale, and you can see that as the declination line moves right in Fig3right the projection of the twilight zone onto Fig3left moves up.  Because of the geometry of a circle, this means the projected band will include more meridians.  Moving the zenith line anticlockwise towards the pole, i.e. increasing latitude, not only widens the projection of the twilight band, but the higher up this projection occurs on Fig3left the greater the effect on the duration of twilight (because of the geometry of the circle).  DaveP 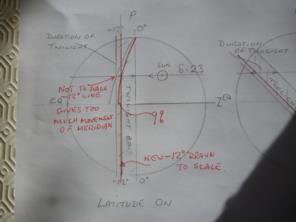