I find that the launch location is near azimuth 050° based on the stars λ and μ (lambda and mu) Ursa Majoris, which are directly above the center of the launch plume. The Sickle of Leo is rising, and Regulus, plus the second star up the Sickle, and a point on the horizon below and between those two stars, together form a nearly equilateral triangle. This pins the time to about 9:31 which would have been eleven minutes after launch (no more blazing rocket glare, so the photographer could open up the aperture for half a second or so and capture the stars).

Tracing a ray from Pad 40 away from azimuth 050° (towards 230°) reaches a small parking area on the other side of the lagoon with easy access from one of the main roads at Cape Canaveral. There's a gap in the bushes by the water which appears to be a nice match for what we see in the photo. That's where the photographer's camera was located, within about five meters (!). There's a small island about 3000 feet offshore just to the left of the direction to the launch pad. It's visible in the original photo, too.

This photo has a rather large field of view, greater than 90°. There's significant distortion away from the center of the frame. Notice that vertical features at the other nearby launch pads seem to be tilted toward the center of the image. Also notice that Kochab appears to be directly under Polaris which would not have been the case at the center of the field of view. And also star images near the edges of the image, including Polaris and Procyon, are stretched by some distortion, either optical when the photo was taken or in a post-processing step.

Make sense? David? Is this consistent with your analysis (more or less)? 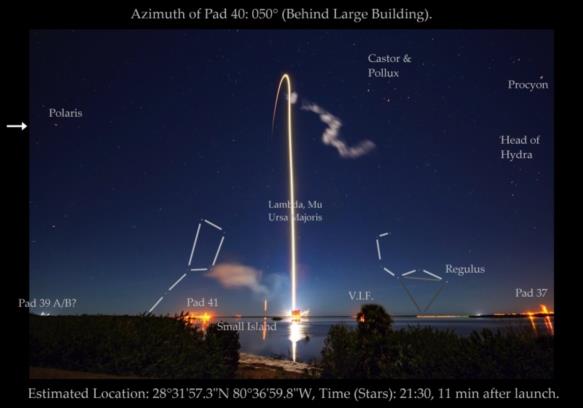 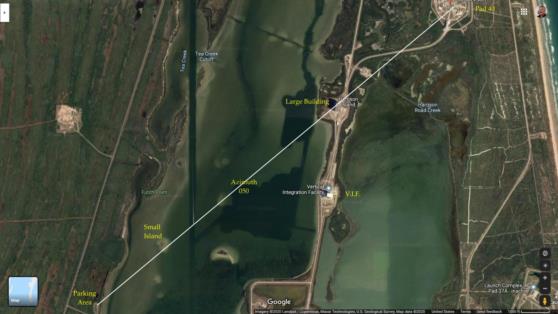 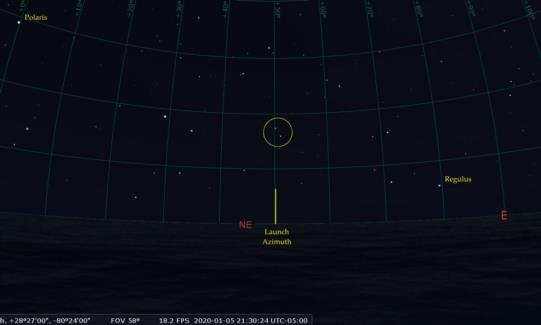