Antoine you wrote: Therefore there would be no use in this case for the "lateral" / "constant heading" part of the Correction Table. Agree ?

I believe this particular table was brought in an attempt to correct for any dynamic acceleration errors not taken out by the clockwork automatic averaging system on the sextant.  I thought I might try and derive how the table was calculated, and my solution is in the photos below.  In fact, our Navigator–plotters rarely used the table; they used the Mears slide inside their hand-held nav-computer.  This was a cunning additional slide, which enabled them to combine speed and heading errors into a correction to the intercept (see ANNEX B of the précis).

Automatic averaging was brought in around 1941 to cope as best it could with the dynamic response of the aircraft.  The reason a two minute run was chosen for the RAF MkIXA sextant was because it was felt that would best deal with the response of the Short Sunderland flying boat, which was then in use by Coastal Command.  Blame is always put upon the phugoid, the constant angle of attack varying speed and height solution in the longitudinal plane, but I think you also have to include Dutch roll and to a lesser extent spiral mode in the roll/yaw planes.  If it’s not too late, look out of the cabin from just behind the engines of your A340 and watch a wing tip make flat ellipses around a distant cloud (the exact shape depends upon whether yaw or roll is predominant).  I’ve watched this from 737s, so I suppose even Airbus aircraft must do it too.  In the simulator, or free of passengers in a light aircraft give a gentle tweak in pitch, and look for the heavily damped, almost unnoticeable, short period oscillation and the much less heavily damped long period oscillation or phugoid.  It was found that two minute averaging was OK over the oceans, but no one wanted to fly straight and level for that long over enemy territory, so the one minute option was added in the RAF MkIXB sextant.

As for what we did in the Vulcan, it’s a long time ago, but as far as I recall we flew three or four rhumb lines equating to a great circle.  We added a separate correction for rhumb-line steering if flying in gyro magnetic mode, but not if we’d selected direct gyro mode for the period of the observations.  We always added a separate correction for Coriolis acceleration.  The Navigator Plotter had a very easily read heading indicator, so that was used to note start and finishing heading.  The pilots had by far the most easily read speed meters to read start and finish speed from, but these gave Indicated Airspeed, so we had to make an allowance for that.  I’ve added a photograph of the pre-computing and recording form we used; apologies if I’ve posted this before.  Best wishes in your retirement from airline flying Antoine.  May it be a long, happy, and productive one. DaveP 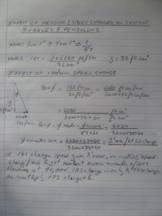 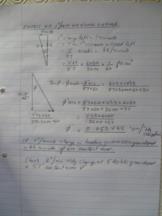 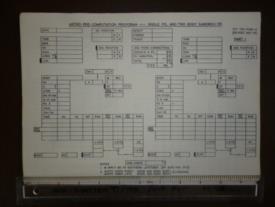