While my question is not a purely celestial navigation question, I can think of no group more capable of answering a question regarding the eclipse of August 21, 2017.

I have attached the illustration which prompted my question.  Not visible with the image is a caption which reads: “THE LONGEST DURATION OF TOTALITY (2 minutes and 41.6 seconds) occurs in and around the Giant City State Park, in Illinois."  They point at one particular spot on the path of totality as the “Greatest eclipse.”

Will the actual period of totality, i.e. passage through the umbra, never vary in duration along the path; will it always be 2 minutes and 41.6 seconds on August 2, 2017?  Will the axial rotation of the earth from west to east in conjunction with the orbital rotations effect the duration of totality anywhere from its beginning to its end? Or will that time vary in places, e.g., as the shadow first touches or leaves the surface of the earth?

In other words, is it possible that along the path of totality across the expanse of USA that there could be a location that will experience a longer (or shorter) period of totality than any other location along that path? 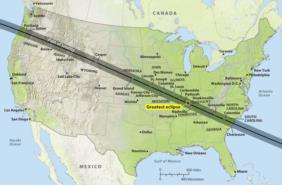