Ah yes, one of my favorite bits of Solar System history! In fact I wrote a letter to the editor on this very topic that was published in Sky & Telescope way back in 1980 (when I was just a kid) pointing out that there was solid precedent for demoting Pluto (it should have been done then) since the asteroids were formerly counted among the "primary planets".

There's a typo in the chart: it says Georgnim Sidus, but that should be Georgium Sidus, the name given to it by its discoverer, William Herschel, in honor of his sovereign, George III, who was a great patron of astronomy and a competent astronomical observer in his own right. Herschel's planet was normally listed in the almanacs as "The Georgian" --the planet "George", as I like to tell it. The astronomers on the continent were uniformly disgusted by the idea of a planet named after King George III of Britain and toiled to have the name replaced by something more classical, more in keeping with the names of the other planets. The French astronomers got the last laugh, I think. Surely they all spoke enough English to realize what a wonderful joke it would be, a scatological joke on English-speakers for the ages, if they could get it renamed Uranus. Vous comprenez, n'est-ce pas?! One of the French astronomers also famously added, "Take that you English silly-persons! Your mother was a hamster, and your father smelt of elderberries!" 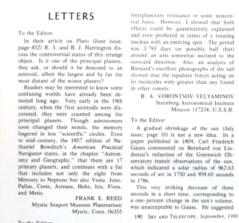