Not quite navigation, but still. How many movies and/or broadcast television programs have had slide rules in them in the past 25 years? By "movies" I mean commercial releases that were or are in theaters. There's Apollo 13 of course...

Last night, I was watching the quirky Wes Anderson film "Moonrise Kingdom" which has a few key scenes filmed here on Conanicut Island and was in theaters last summer. For no more than a quarter of a second, a slide rule makes an appearance, as a prop on a nautical chart. I've attached a screen capture. How many others? 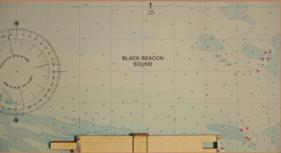