As long as you can do sin/cosine on it, I don't think there is any meaningful difference between a circular slide rule and a stick, as pertains to celestial navigation.

I inherited my dad's old slide rule that he purchased when studying mechanical engineering in 1941.  He continued to use it throughout his career, and said it pleased him that he could retire before they "made him put a computer in his office."  He said young engineers could solve a problem to 13 decimal places, but they had to take a morning to write the code to do so.  He, on the other hand, could come up with an answer that was close enough to use in a minute or so.

In engineering (as in celestial navigation) the extra decimal places may bring little or no extra value to solving the problem at hand.

You can solve great circle calculations with a slide rule.  Bowditch vol. 2 (1975) has a chapter on great circle calculations.  They outline the equations that Ageton used to generate HO 211.  Ageton used cosecants and secants, but by turning the equations over, you can express them as cosines and sines, and thus solve them with a modern calculator...or a slide rule.

Bowditch made two errors in the printed equations, confusing secant with cosecant.  I am attaching a photo of the page where I correct that.

More usefully, I am attaching a PDF that is a worksheet for doing great circle calcuations manually.  I started out by doing them with an electronic calculator, to ensure that I understood the process of solving gc problems, and could perform them reliably.  This kept me from having to learn two new things at once.  Once I had the equations working for me using a calculator, I turned my attention to my slide rule.

After I practiced enough to get on top of the mechanics of using the slide rule, I found I could work a great circle problem in 4 minutes...the same amount of time it takes me to work the same problem with an electronic calculator.

The outputs for this are a) the bearing of your destination from where you are now, and b) the distance from you to the destination.

These are precisely the same outputs you get from sight reduction tables.  So you can use this worksheet to do sight reduction.  Just substitute GP GHA and declination for destination longitude and latitude.  If you, like me, tend to do most or all of your sight reduction using Pub. 249 vol. 2 and/or 3, you know that you are just fine when you use sun/moon/planets and stars that lie near the ecliptic.

For the occasional sight of a star that lies further north than 30°, I find that a slide rule takes up less space in my suitcase, and weighs less, than Pub. 249 vol. 1 (or alternatively, 18 pounds less than Pub. 229).

As for slide rules and electronic calculators (or even sight reduction applications on my smartphone), I simply LIKE the slide rule better.  My joy in using it is analogous to the satisfaction I take in using a sextant to begin with:  navigation with no batteries required. 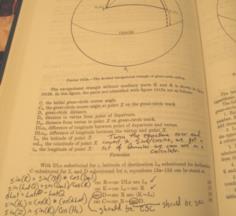 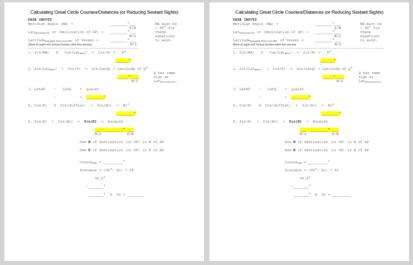