Hey, that's very neat! It appears to be an example of David Thomson's "Longitude Scale". Thomson's tables were very popular and printed in many runs (a bit misleadingly called editions). His tables were even adopted by Nathaniel Bowditch as the second method in the Navigator in 1837 with a probably false claim that his son had re-calculated them himself. I teach a (very slightly) modified version of Thomson's method in my Lunars class. My instructions are included below. Like nearly all of the widely used methods, Thomson's was a series method and therefore it could easily be worked up on some sort of slide rule. This is in marked contrast with the direct triangle, long form solutions of the lunars clearing problem.

I've never seen a Thomson slide rule for lunars and know of this "longitude scale" only from the title page of his tables (see below). His tables were highly successful in the market, but this product does not seem to have gone anywhere. I would speculate that the problem with the slide rule was that the tabular solution was already so simple that the slide rule may have seemed like an un-necessary decoration, or possibly the tables superseded the slide rule. It only took about ten minutes to work a lunar by Thomson's tables, working at a leisurely pace. I can't imagine that the rule would have saved much time. There's enough detail in the photos you've taken that we ought to be able to reverse-engineer it and figure out the procedures for its use. They should be quite straight-forward, and I assume closely related to Thomson's standard lunars tables.

By the way, the description and the displayed title page are simply examples of the German version of the Nautical Almanas -- the Nautisches Jahrbuch. Like the English-language Nautical Almanac, it listed pre-computed lunar distances for every few hours daily. There was some modest local differences, but it's basically the same thing. The year displayed, 1858, is very late for lunars at sea, but land explorers were still shooting lunars, for example in Africa, for decades after this. 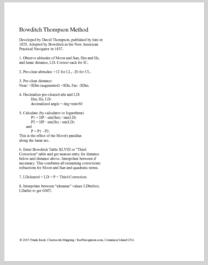