'Kermit' Antoine Couëtte, you wrote:
"Cherry on the cake, by 10:01 UT on Jul 24th, 2016 a quite bright Artificial Satellite (INTERNATIONAL SPACE STATION ?) lit up in the South West shortly before passing quite close from SPICA (within 3°) and continued its track towards the North East"

Since everything else in this puzzle is more-or-less easy, I decided to think about this last observation as a "visual satellite position fix". You've given basic observational data here: at 10:01 UT on July 24, the ISS was close, but not too close, to Spica. Where might you be? Since you're a highly experienced visual observer, your "within 3°" is a number we can count as a reasonably confident upper limit for the angle of closest approach. But if the angle had been much shorter, let's say less than half a degree, you probably would have noted that. We can therefore look at angles of closest approach between 0.5° and 3°. I'll also throw in one observational aspect that's not in evidence, but you would have noted it easily if asked: the satellite passed above Spica, away from the Jupiter side, not below. Next for 10:01, I'll call that the interval from 10:01:15 to 10:01:45 (why not?).

To "solve" the navigation problem, we go to any satellite prediction software, such as heavens-above.com, select the ISS, enter an appropriate estimated position, and then vary the specific position and time to get corners on a bounding box where the observer might be located.Then round those corners off for an error ellipse. In the map below, the long axis of the ellipse corresponds to the uncertainty in time. Clearly, if you had been able to give us the exact second of UT when the ISS passed Spica, then that long axis would have been radically shortened. The narrow axis of the ellipse depends on the distance of closest approach to Spica, and if you had been observing with binoculars, that uncertainty might have been reduced to a fraction of a mile on the ground. No question; it's all consistent with Darwin, Australia.

Observing artificial satellites --no sextant required!-- yields accurate position information. Unfortunately, like every other form of celestial navigation, it's useless on a cloudy day.

In the postscript to your message, Antoine, you wrote:
"PS : No need to use TT-UT to night ... Am I not showing some progress? :-)" 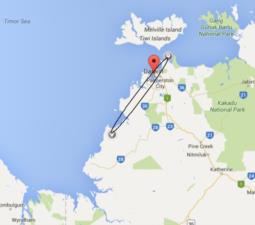