David Iwancio you wrote: Take a look at the azimuths for the body.  The higher declination body is on the "inside track" around the pole and starts its turn before the lower declination body, so at the hour angles you're looking at the differences in azimuth will be increasing.

For the moment, I'd suggest meditating upon Bowditch table 20:  "Meridian Angle and Altitude of a Body on the Prime Vertical Circle."  For declinations greater than latitude, it tabulates the hour angle and altitude of when the star is moving strictly vertically (i.e. where the "d" for azimuth values would change sign.)

Thank you for the hints.  I couldn’t see the similarities at first, but I followed your leads.  I changed the question to.  For an observer in the same hemisphere whose latitude is less than the body’s, at which LHA and altitude would two fictitious bodies with the same SHA and declinations one degree apart have the same altitude.  Then, after much playing around with ‘Navigator’ ‘Star Finder’ and screwed up diagrams thrown in the bin, I came up with Figure 1 attached.  It's a plan view looking down from the observer’s zenith.  I chose a nominal declination for the Sun of 22.5°N.  The green line is the prime vertical circle and the blue line is the Sun’s path throughout the day.  The line from Z, the azimuth line, comes closest to the prime vertical when it is tangential to the blue line.  At the point of contact, the fictitious bodies with declinations 22 and 23 degrees are on a circle of equal altitude so ‘d’ is zero.  Father out from Z the 23°dec body is highest.  Nearer in towards Z, the 22°dec body is highest, so the point of tangency is the azimuth and altitude where ‘d’ changes from minus to plus. If the plus and minus appear the wrong way round, don’t worry.  They did to me too, until I realised the Sun is rising at about LHA=266, and it would have been more sensible to start with the azimuth line on the left-hand half of the diagram.  This ties it in to Bowditch Table 20.

You can see that the Sun is at roughly the same azimuth for quite a while, so using Bowditch’s formula should give more precise results than any obtained by drawing, but it does leave you wondering what Boy Scouts in tropical countries use for an emergency compass. 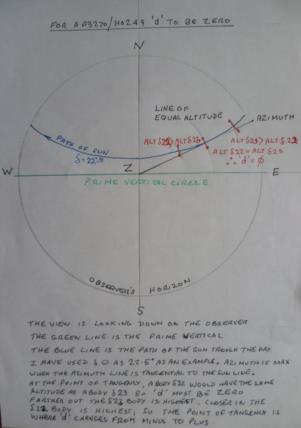