Fist a couple of apologies.  In my diagram Figure 2 for latitude and declination in opposite hemispheres, when inking over the pencil for a better photograph, Sun at 20S and 20.59S mysteriously became 30S and 30.59S.  This of course is impossible until the Earth tilts another 7.5 degrees on its axis.  It’s also outside the declination limits of AP3270/HO249.  A corrected diagram appears below.

When I said in my previous post concerning ‘d’ changing from minus to plus “You’d probably never come across this in real life, because by the time it happens, the star would be so low in the sky, you’d have to be really desperate to use it.” That wasn’t quite true.  It was true for the example I gave.  I.e. when the observer’s latitude is in the same hemisphere and a lot less than the stars declination.  You’ll see from a study of the tables in 3270/249 that as the observer’s latitude approaches the star’s declination, ‘d’ changes from minus to plus at useable altitudes.

My copy of my ‘d’ generating spreadsheet wouldn’t unload for me.  In case it didn’t unload for you, I’m posting it again, this time with inputs which you can check in Table 20 in Bowditch as well as in Volume 2 of 3270/149.  You can change the input values for any value of latitude less than the value of declination in the same hemisphere and any value of declination using the cells coloured blue.  I’ve not tested it outside those parameters yet.  The generated values of ‘d’ appear in the cells coloured green.

An interesting historical note occurred whilst I was doing the research for this.  I bought my AP3270 Vol 2 (Green Band) on eBay several years ago.  For the first time, I noticed the name and address of the original owner written inside the front cover, a gentleman from Edinburgh who had also written ‘MV Scotstoun’.  Scotstoun is an area of Glasgow close to the Clyde and the shipbuilding areas.  Although built on the Clyde in 1964, MV Scotstoun was a general cargo vessel which travelled the World,  so the Vol 2 now held by me might well have been used in latitudes where ‘d’ changed from minus to plus down a declination column.  DaveP 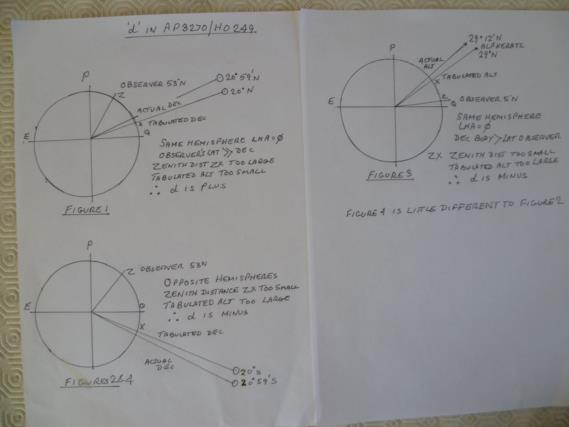