Here is a fuller explanation.  If AP3270/HO249 were to attempt to give tabular values for every minute of declination up to 30degrees declination and every minute of latitude from 0 to 90 degrees, Volumes 2 & 3 would have to be 7200 books instead of the existing two (please check this someone).  We get around minutes of latitude by using an assumed position to the nearest degree, so that would cut the number of books required to 120.  We can’t really ignore minutes of declination, so we cut the number of books required from 120 to two by use of the ‘d’ correction used in conjunction with ‘Table 5’.  ‘d’ is the difference in altitude of a body for a whole degree increase in declination for a particular LHA.  However, we want the change in altitude for a number of minutes of declination somewhere between one and 59.  We get this by entering Table 5 with ‘d’ along the top and the known number of minutes declination down the side.  All Table 5 does is multiply ‘d’/60 by the required number of 60ths.

For people like me living well north of the Sun, Moon, or Planet’s most northerly declination (Volume 3 users you could call us) the story is very easily understood.  Looking at figure 1 below, which is drawn showing the body on the observer’s meridian (i.e. LHA is zero) and the body is N of the Equator, tabled declination used would be lower than the bodies actual declination, so its zenith distance (90- altitude) would be too high.  Therefore, tabled altitude would be too low, so ‘d’ has to be plus.  Similarly, if the body is south of the equator as in figure 2 below, zenith distance would be too low, so tabled altitude would be too high, so ‘d’ would have to be minus.

If you turn the diagram upside down, you get the same effect for observers south of 23.5 degrees south of the Equator.

Figures 3 and 4 below show the effect when the observer’s latitude is significantly less than the body’s declination and the LHA is zero.  For opposite hemispheres, ‘d’ is always minus.  For the same hemisphere ‘d’ is also minus.

A sudden change in ‘d’ from +60 to -60 with a one degree change in declination column, which is occasionally noticed, isn’t as frightening as it first seems when you also consider corresponding changes in azimuth.  A correction to a position line of +10’ when the azimuth is 180 degrees would have the same effect on the chart as a correction of -10’ when the azimuth is 360 degrees.

Things start to become harder to follow when the observer’s latitude is less than the body’s declination and LHA moves away from zero (i.e. the body moves away from the observer’s meridian).  ‘d’ starts to get less negative and eventually becomes slightly positive.  This effect is pronounced when the observer’s latitude is only slightly less than the bodies declination.  In this case, the body travels close to the overhead.  When this happens, azimuth is changing quickly with small changes in LHA, and initially ‘d’ becomes less negative very quickly although this speedy reduction in minus ‘d’ tails off as LHA increases.  If LHA gets large enough in these circumstances ‘d’ will eventually become slightly positive.  Quite why, I’m still working on.

In the meantime, download Vol 2 and play around with it yourself https://www.thenauticalalmanac.com/Pub.%20249%20Vol.%202.pdf , but don’t try and print it; it’ll take all day and use up all your paper and ink.  DaveP 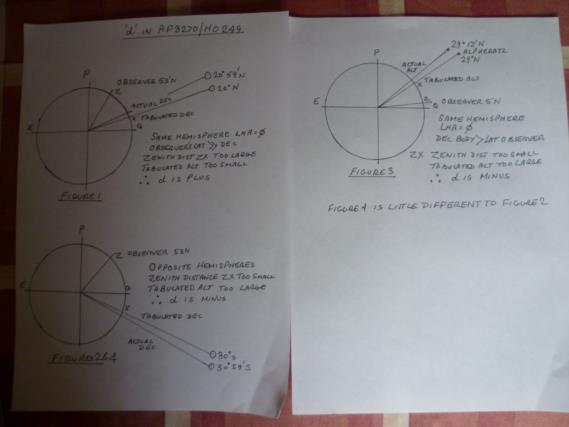