Hello Chris, you wrote:
"I was wondering if your app has passed the scrunity of the Apple Corp. - do you have any updates?"

Short version: the app exists in fine working order for iPhones/iPads and has been available for "side-loading" since December, but Apple has rejected it for "Apple" reasons.

Long version: I announced late last year that the iOS App Store version would be submitted soon, but it's a lot of work. Since the Android version has produced only trivial income (less than $175 total as of now), this submission process got pushed way down my list of priorities, which naturally has to be focused on activities that can pay the rent. I finally got around to it last week. It was about two days of work figuring out the intricate process of signing digital certificates, creating provisioning files, and generating the necessary screenshots and other materials to Apple's exacting, annoying standards. I finally submitted the app a couple of days ago, and within four hours a reviewer got back to me with a minor configuration issue. No problem. I fixed that and re-submitted. Just today I got back their new complaints and demands:
"-Please provide a video showing the app in use with a sextant.
-Please clarify what spoofing you are trying to uncover/detect."

To which I say "WTF?" Their demands here are not complaints about Apple interface or software standards. Rather this is some over-zealous reviewer who doesn't understand navigational science (very natural, why she should t and thinks it's his or her job to protect the world from things that he or she does not understand. Unfortunately, this is very typical Apple behavior, and it's really no different from the last time I dealt with Apple twenty years ago. One might think that corporate culture would change in a generation, but that's the great strength and also the terrible weakness of highly bureaucratized corporations: their rules and principles and attitudes long out-live the people within the corporation. Corporations are robotic entities. Apple continues to be a threat to its own developers...

I have submitted a review appeal, including my "WTF?" as the opening comment. We will see what happens.

Meanwhile, you can still get a cheap Android phone with the power of a supercomputer for less than the price of a programmable calculator. Get the Android version of the app here: GPS Anti Spoof Pro (Google Play store). 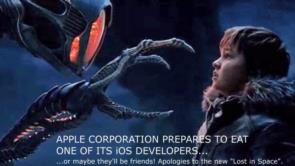