I have attempted to perform shadow CN using a HUAWEI Tablet and charging plug.  The tablet serves as a level and sight reduction calculator. The charging plug serves as a vertical block just as your lego blocks. A large source of error will be getting a true level. Another source of error will be in measuring the height of the vertical block and shadow length. I do not have my calipers with me so a steel tape measure will have to do. The mechanical pencil used to mark the shadow is 0.5 mm and also contributes error. A pair of observations were made about 20 minutes before LAN. This has the Sun changing altitude at a slow rate making timing less critical.

Intercept 1. 66nm toward from GPS

Intercept 2. 20nm toward from GPS

I am actually surprised that this method is within a degree of GPS.  Perhaps with a little practice accuracy could improve a bit.

To know how you are really doing will require setting up at a different locations and limit observations to lets say 4 and accept what you get and not to keep making observations until you get a GPS match.

[Note from FER: this post required some serious repair, so I have combined it with a separate comment originally posted separately]

Many thanks for bringing up the subject of sunsights with shadows. As it's a change of subject I've posted details under a separate heading. And, David, I loved all your reasons for why it would probably not work. The one you got absolutely right was " all those who must be obeyed mustn't mind it all happening over lunchtime".

In March 2010 I posted details of taking sun sights using short lengths of ruler to measure the length of shadow cast by a gnomon made of Lego blocks. Unfortunately I didn't explain either the theory or the practical very well and Greg R, as well as making some really helpful suggestions, concluded that "because of the small scale and penumbra length, estimation accuracies better than the semi diameter of the sun should not be expected'.

I have been doing shadow sights for the best part of twenty years and have filled about 15 stout notebooks with observations and although the system is not perfect it can still offer a lot of enjoyment.  For anyone without a sextant or for those in my position where the sun is too high for the use of the artificial horizon by mid morning it might be of interest.

A couple of years ago Greg  posted details of Prime Vertical sights and this added a new dimension to shadow sights. I have attached photos from my notebook that show the procedure. It is certainly more complicated than using a sextant but that is only for these sights. Normal sights are more straight forward.

Photo 1. The altitude for PV is calculated as per Greg's posting. From now on we are working backwards to find out what length of shadow cast by a 28.6mm gnomon consisting of 3 Lego blocks will give an altitude equal to Hp (height predicted).

Refraction AS FOR STARS AND PLANETS is ADDED to PV to give HP and the tan of HP found on the calculator. Now the height of the gnomon 28.6 divided by the tan Hp gives the length of the shadow required which in this case is 31.31mm. Now the instrument I am using is my gift card shadow catcher. So called to distinguish it from all the others that I use. It has an effective length of 140.25 ie if the graduations on the ruler were continued to the far end of the small piece of attached Lego the reading would be 140.0.The length has been arithmetically changed to compensate for all the errors. . The required shadow is taken from 140.25 to give a reading of 108.94mm on the scale at the time that the sun is at Prime Vertical.

It is impossible of course to measure a shadow to that accuracy but what can be done is to find out how long it takes the shadow to cover one mm on the ruler and from that data calculate an accurate time for when the shadow was at the 108.94 mark. I started timing the shadow when it first arrived at 107.5mm and again when it left that mark. This was repeated at .5 mm intervals until the required 108.94 mark was passed. The height of the gnomon is chosen to give a sharp edge to the shadow. After the 109.5 mark was passed the average time at each station was calculated and then average time per mm of shadow movement. Then by proportion each measurement was adjusted to give a time when the shadow was passing 108.94 and the average of these times was used to calculate Longitude using the method posted by Greg.

Photo 2 When treated as normal sights an average intercept of 0.9nm was obtained. The Longitude found was then used to calculate a time for Meridian Passage. Because of the sun's altitude at MP it was necessary to use a taller gnomon, in this case a 100mm brass hinge.

I got a position fairly close to my GPS position which is about 250m from my Google Earth location.

Photo 3  Details of the shadow catcher. When the instrument is "leveled" the vertical line will appear straight in one position only. It is not a true level but a level that can be repeated very accurately. No two levels that I use agree with each other but this does not matter as long as a level for each one is repeatable.

Photo 4. The setup for PV sights. Note that sights were done indoors due to strong winds outside. It makes little or no difference to the result.

Photo 5. The setup for MP sights. After calculating MP the equipment is set up about 5 minutes before. There is no requirement to time the sights but merely watch the shadow and record each tenth of mm as it shortens and taking the shortest reading as the right length of shadow to calculate the sun's altitude. Note that the shortest shadow gives the highest reading on the scale. Also it gets very hot here in the Australian summer so it is often necessary to take the sights under shade cloth.

The theory... The equipment that I used for this exercise uses one of many ways to measure a shadow. I usually prefer the end  50mm cut from a wooden school ruler. If you imagine the scale extended across the blank area then the scale on a 300mm ruler would end at about 306mm. For taking the sight the gnomon is pressed snugly against the end of the ruler and the equipment leveled. The time and reading on the scale are taken at the same time. The length of the shadow is calculated by subtracting the reading on the scale from 306, the imaginary end of the ruler's scale. The sun's altitude is calculated by simple trig ie dividing the height of the gnomon by the length of the shadow. This gives Hs. Refraction is then applied as for stars and planets. The reason for this is that this varies with change of altitude whilst all other errors can be compensated for in an overall adjustment that will see the ruler have a new "effective length" .

Treat the sight you have measured as a normal sight and work out the intercept from your known position. You will probably get an intercept of 20nm or so. On average a change of 0.1 mm represents about 5 minutes of altitude and hence 5nm of intercept.

Now if you have read the scale correctly to the nearest 0.1mm and timed the sight correctly then in theory that 20 NM intercept represents the sum of the following:1 The level is not true. But it will be the same level out of true every time you take a sight with this equipment. It can be compensated for.2 Because of this the gnomon will not be vertical. It will not be vertical by the same amount for future sights and can be compensated for. The gnomon however will always be at right angles to the base.3 The semi diameter of the sun has not been allowed for but that will be the same for all future sights and can be compensated for.4 The blank bit on the end of the ruler was not measured correctly.

Now if 0.1 mm of shadow represents about 5 minutes of altitude then 4 x .01 mm should represent 20 minutes. If the intercept is positive add 0.4 to the 306 and if the intercept is negative take 0.4 from the 306. Recalculate the altitude using the new length and a much more realistic intercept should result. Of course the equipment cannot be calibrated with just one sight.  I will post details of how to do this in a couple of days. 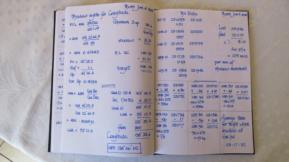 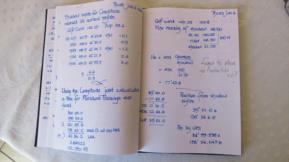 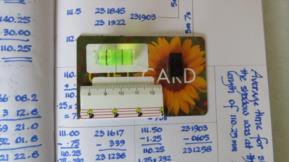 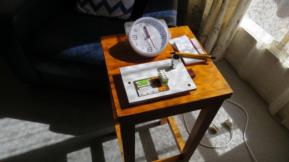 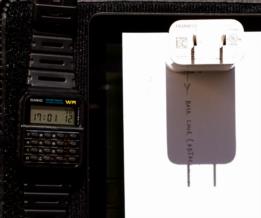