Reply
Re: Sextant calibration accessory
From: Fred Hebard
Date: 2021 Mar 8, 12:15 -0500
I tried Frank’s technique.  It was difficult.  I suppose it could be made to serve, and actually fits my situation well as I have a sextant that has proven true and one that I’m not sure about.
Meanwhile last month, when somebody mentioned a Manfrotto Super Clamp for mounting a sextant to a tripod, I bought one in order to take another crack at calibrating my Husun Mate sextant, what has now become an 18-year project.  I then, of course, needed a new tripod!.  I purchased a Benro TAD18A tripod.  Should have gotten the taller TAD28A, but…. the 18 was priced at $104.  With a Manfrotto 056 pan-tilt head for $64, I felt good about the price.  A  Desmond leveling base for $46 rounded out the kit.
The leveling base in the tripod is very handy for bringing the horizon and sky views into final alignment in an artificial horizon.  It also is 10-fold more inexpensive than any tribrach I could find.  Just plop a mirror on a leveled leveling base and you're good to go with a nice artificial horizon.  I use a short Starrett machinists' level to level the base for this use.  For brighter objects, I use a Davis artificial horizon with cooking oil, for its low toxicity).  For precision work, I use the oil, not a mirror.
The tripod-mounted sextant  definitely _feels_ more precise than hand held for doing star-to-star distances.  I had been hoping to gather some clearcut evidence for that and write it up for the Navlist, but so far my handhold values for Hc-Ho and it’s standard deviation are lower than when using the tripod.  The mean significantly so (just barely) after 5 rounds of comparison of three replication each,  In addition, the R-squares from regressing Ho on Hc are higher with the handheld.  However, I have gotten a few spectacularly high R-squares with the tripod (> 0.99999).
I really don’t understand the best method for assessing differences between sighting techniques statistically.  Ho-Hc is asymptotic to zero so would not have equal variances at different values. And then both mean values and standard deviations are informative.  Is there one statistic to fell the whole story?  I am afraid my cookbook for statistics does not extend to metrology.  I hope somebody here can chime in.
I am also wondering why my handheld values are better.  The tripod setup I have is the most inexpensive I could cobble together.  A lot more money could be spent on a geared pan-tilt head.  I think I might be off axis on the sextant.  Would that drive Ho-Hc positive rather than negative?   Part of the difficulty is twisting your body into the required positions.
Thanks,
Fred Hebard
mbiew@comcast.net

Yes, this could work well! I considered a kit like this some years ago. Unfortunately I couldn't find any inexpensive prisms with good optical qualities. But you know, instead of a prism, you could use a pair of mirrors in a solid mounting. In place of a set of prisms, you would have a set of pairs of mirrors at certain calibrated angles. One pair would produce a 15°-offset light beam. Another would produce 30°. Yet another 45° and so on. As you suggest, we could also have sets for micrometer eccentricty checks (for example, 5°10', 5°20', 5°30' etc.). And then... hey, why don't we mount one pair of mirrors on some sort of rotator so that we could cover many more angles?... Sure. We would have one fixed mirror and then another mirror on a rotating mount. A pointer of some sort would allow us to set the angle. Then you would place this calibrated source on a table so that its light "output" feeds into a sextant next to it. You can see where this is going...

In short, you can use a sextant to calibrate a sextant. Place a sextant with excellent calibration on a table looking at some distant target. Set it to any desired angle and output the light from its index mirror as input to the index mirror of the the sextant you're trying to calibrate. If the calibrated instrument reads 22° 17.5' (or whatever), then the instrument being tested should read exactly the same. The visual process is identical to measuring index error: you align the direct view of the distant target with the index mirror view which has been offset by a fixed angle. I tried this out extensively about a decade ago. It works. It's rather "fiddly" getting everything aligned, and I've never been really happy with the results, but I may have given up too easily. At least a table-top test like this can be done in dreary weather, and that's a big advantage. Lunars are easier, but they require clear skies and generally more time.

In the photos below, I'm looking through two sextants at a tower out on Plum Island in Long Island Sound about 10 nautical miles from my observing location. You'll notice that both sextants have their scopes removed, and I am using a spotting scope to test the alignment. The spotting scope is on a tripod in line with the usual optical axis of the sextant that I'm testing With a scope like that it's possible to get repeatable measurements accurate to 0.1' every time. This is also, by far, the best way to test or eliminate index error (just the spotting scope on a tripod; no second sextant required for index error tests). By the way, I knew I had photos of this arrangement but no idea where to look. Luckily it occurred to me that I might have named copies of the photos with a "Plum Island" tag. And yes, these are from nearly a decade ago. 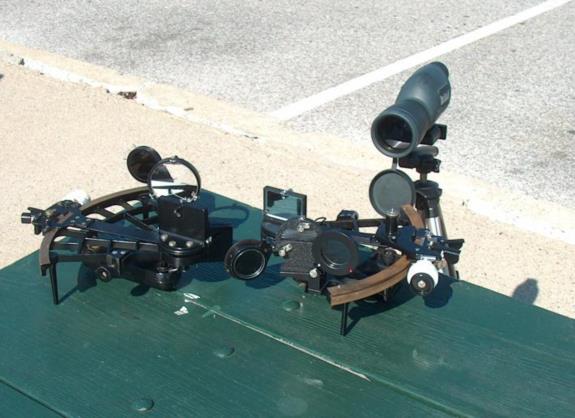 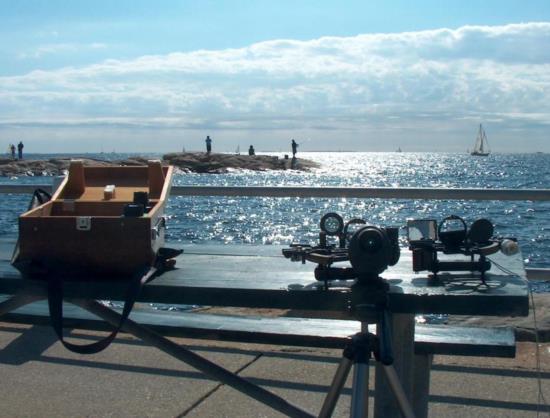